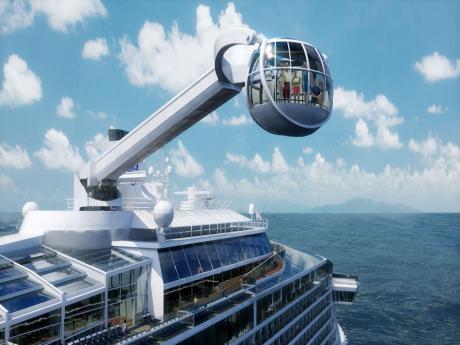 This computer-generated image provided by the Royal Caribbean cruise line shows its forthcoming ship, Quantum of the Seas, which features an observation capsule on a movable arm.-File

Getting people onboard a cruise ship can be tough. They fear bland buffets, debilitating stomach bugs and a crowd whose idea of excitement is playing canasta.

Even the CEO of the world's second-biggest cruise line admits he once avoided cruises.

"I had always thought 'I'm too sophisticated for this,'" says Richard Fain, CEO of Royal Caribbean.

That initial hesitation - over what Fain calls "old myths" - is a big stumbling block. But at the moment, it's far from his only challenge.

The cruise industry has suffered through a difficult few years. Like airlines and hotels, cruise bookings plunged during the Great Recession. Then, just as the industry was recovering, Carnival Corp's Costa Concordia sunk off the coast of Italy, leaving 32 passengers dead. A series of well-publicised mishaps, including fires, electrical failures and outbreaks of vomiting and diarrhoea, also left vacationers wary.

Fain tries to lure reluctant cruisers with onboard ice skating, rock climbing, a surfing machine and skydiving simulator. He's also boosted advertising and incentives to travel agents, although he acknowledges that the best promotion is when happy vacationers get off his ships and rave about the cruise to family, friends and co-workers.

"Nobody takes a cruise simply because they saw an ad," he says.

Overall, his method is working. Royal Caribbean carried 4.9 million passengers last year, compared with 3.5 million a decade ago. And he sees untapped potential. Only one in four Americans has tried a cruise, while millions of people in China are just now embarking on their first vacations.

Fain, 66, didn't take a cruise until 1980, a year after joining Royal Caribbean's board. The company's then-president called Fain presump-tuous for making suggestions without first taking a cruise. To negate that criticism, he and his wife took the shortest, cheapest cruise they could find: a three-day trip to The Bahamas. They were hooked.

Fain became CEO in 1988, and over the past 26 years, grew the company into the world's second-largest cruise operator. Today, Royal Caribbean has 41 ships across its six brands, including its namesake line and Celebrity Cruises. The company earned a US$474 million profit last year.

The passengers have returned, but Fain says prices aren't yet back to pre-recession levels.

"It's less expensive than a comparable land vacation," he says. "The truth is I'd like to have it be a little less unbelievable value."

New ships help Fain get closer to that goal. They have more rooms with balconies - which cost more - and include more amenities. For instance, the Oasis of the Seas has 26 different places to dine, some which charge an extra fee. Overall, passengers spend 25 per cent more than those on older vessels. New ships are also more fuel efficient, costing Royal Caribbean 20 per cent less, per passenger, to operate.

More than half of Royal Caribbean's customers now come from outside the United States (US). And they tend to pay more than Americans.

China is home to a quickly growing middle class, heavily concentrated in cities along the coast. The country generates Royal Caribbean's highest margin business. The company is going to base its newest vessel - the 4,905-passenger Quantum of the Seas - in Shanghai in May 2015.

"Historically, to the extent that Chinese took vacations, it was to visit family and maybe historical monuments," Fain says. "The idea of going on a vacation just to relax, like a beach or a cruise, without a purpose, is relatively new."

Back home, Fain continues to push cruising. Sixty per cent of the US population lives within a 300-mile drive of the company's 14 domestic ports. But only 24 per cent of Americans have ever taken a cruise.

Royal Caribbean advertises in the US, and it relies on travel agents - who are paid hefty commissions - to steer people to cruises instead of tropical islands, Las Vegas or Walt Disney World.

Then there are the ice skating rink, surfing and other activities.

"The truth is: Most of our guests don't climb the rock wall. I will admit I have never made it to the top," Fain says. "But that doesn't mean it isn't a wonderful amenity. People get to watch others. I love watching and making fun of my friends trying."

But none of that works if passengers don't feel safe.

Royal Caribbean had a fire aboard a ship last year ending the voyage early. In the first two hours, it issued 40 tweets, including one of the damaged areas that Fain calls "horrific".

Fain says the transparency helped the company's credibility. It's like an airline pilot giving passengers confidence by explaining maintenance problems.

That shows "whatever the issue is, the pilot knows what it is and the company is doing everything they can to deal with it", Fain says.

Then there are outbreaks of the highly contagious norovirus, which gives passengers stomach pain, nausea and diarrhoea.

"Last year, 23 million Americans got norovirus on land," he says, "and a few hundred got it on cruise ships."

At least on a cruise, you know the source of the virus is on the ship. That's why Royal Caribbean routinely washes elevator buttons, casino chips, ATMs and TV remotes.

"In this case," Fain says, "obsession is a good thing."