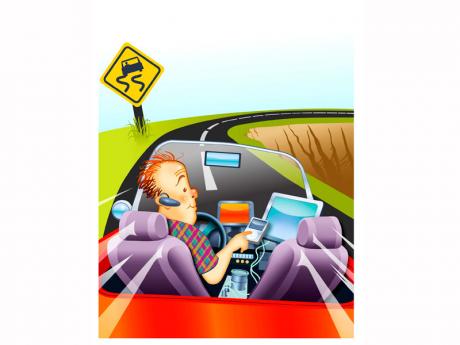 Last year, the National Road Safety Council lamented the upward swing to 306 deaths. The fact is, though, 307 is plenty fewer than 434, the 1993 mark.

I've listened to too much from those guys, but Morais is a Guy whose presentation on Wednesday was a breath of fresh air. We know that the Road Traffic Act is long overdue for revamping, and given that June is Road Safety Month, it is more than timely.

Some of the expected changes involve clamping down on the use of cell phones while driving, and modernising the Island Traffic Authority. This, coupled with the improved technology available to the police, means that the screws will be tightened more on the misusers of the roadways.

Let's make it clear: We use the term accident, but an accident is a random occurrence caused by chance. What we have are incidents of carelessness and negligence caused by people who want to take a chance. I don't know of any road accidents; I know of crashes.

Although all of us have been guilty of chatting on the phone or glancing at a text or two, but some individuals have really just gone on too bad. There is the stereotypical young woman, who can barely drive the oversize sport utility vehicle (SUV) she bought for no logical reason. She traipses through traffic with her cell phone wedged between her shoulder and ear, rehearsing for an episode of 'crick neck', and glancing at the vehicles ahead. Indeed, one particular individual was so distracted at a traffic signal that after the lights had gone through several colour changes, she remained planted like a fence post until a Rastaman rode up and asked, "Lady, you no like none a dem colour deh?"

In Jamaica, it is not known how many car crashes are caused by distracted cell-phone users, but some international studies suggest that phones might very well feature in more collisions than alcohol. A study published about a decade ago in the New England Journal of Medicine discovered that mobile phone usage while driving multiplied the risk of crashing four times. A more recent survey by the US Centers for Disease Control and Prevention showed that distractions, including talking, texting and emailing on phones, contributed to close to one-fifth of all fatal crashes in the United States between 2010 and 2011. Therefore, the extra beer might not be worse than the 'B-E-E-R' one is reading.

Nonetheless, as we try to reduce road fatalities and encourage responsible driving, there needs to be improvements in the collection of data and their analysis. For example, we know that the majority of road crashes involve male drivers, with females accounting for no more than 95 deaths in any one year. Now, quite separate and apart from the notion that Miss Textisha might have run someone off the road and caused a crash, with her sticky fingers and straying eyes, we have to simply ask, "How many females are there driving?" And then that does not account for the relative difference in driving times.

Simply put, there are more male drivers, and men drive more often and longer hours and distances than women. Be that as it may, we might still find that males are disproportionately more involved in crashes. Nonetheless, the point is, the data collection needs stepping up.

Yet, all the partners who have been involved in the attempts to reduce road crashes need to be commended for the overall reduction in the vehicular deaths since 1993. In that year, the figure was 434, and moving generally downwards, it went below 300, to settle at 295. Over the next few years, the pattern reversed to reach 408 in 2002. After that peak, there was a general tendency to decline with a few minor reversals, until it reached the two-decade low of 260 in 2012. Last year, the National Road Safety Council (NRSC) lamented the upward swing to 306 deaths. The fact is, though, 307 is plenty fewer than 434, the 1993 mark.

Still, before we make any more progress in the number of fatal road crashes, the data need to incorporate an analysis of the number of motor vehicles on the road as well as the number of drivers. At present, the figures are aggregated either as a raw total or per 100,000 persons in the population. It makes much less sense to use the population on the whole, since the majority of the population does not drive.

In the Jamaican situation, my educated suspicion is that the NRSC, along with the Jamaica Gasolene Retailers Association, transport ministry and, not least of all, the police, can take a bow. This is because we have essentially the same amount of land space, slightly more kilometres of road - although the drivable surfaces almost caused Tessanne Chin to be called an informer - and most important, significantly more motor vehicles and drivers registered.

And if you add the few undocumented foreigners who inexplicably have driver's licences but no English, the driver pool gets deeper. So, even without sophisticated statistical analyses, logic tells us that the road fatalities should proportionally rise with the increase in drivers and motor vehicles on the roads.

However, there is the need to perhaps engage the academy, and here I am shamelessly touting the Sociology Unit at the University of the West Indies. A sort of tracer study ought to be done to get a true picture of the persons who have been injured in these crashes. This would improve our knowledge, because the fatality figures do not capture persons who die in the months or, say, a year after.

Nonetheless, one element I would like to see in the policing is their enforcement of the Child Care and Protection Act for persons who speed and drive recklessly while carrying schoolchildren. The charge of reckless endangerment of minors or the equivalent must be brought on those who, with scant regard, think that children are simply animal cargo. This increased vigilance, along with all the changes, should bring even greater rewards.