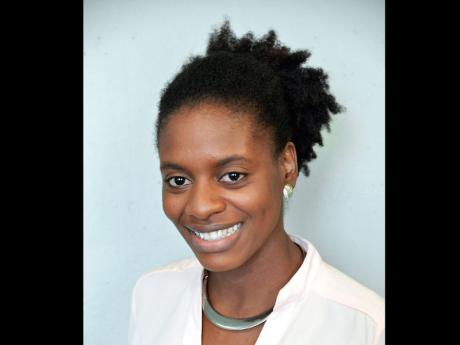 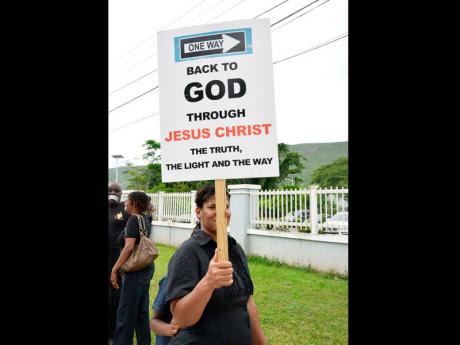 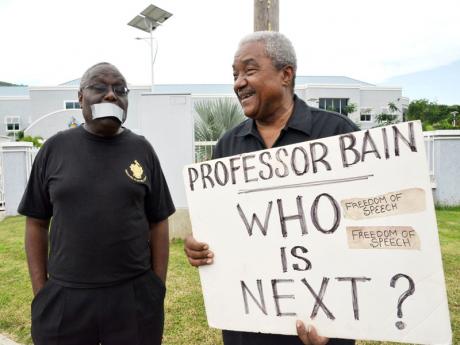 Dr Wayne West (left) and Errol Hewitt demonstrating against the firing of Professor Brendan Bain at the gates to the Mona campus of the UWI last Friday.-Norman Grindley/Chief Photographer
1
2
3

Jamaica's dormant champions of social justice got a chance to put in a rare (or is it rear?) appearance recently, thanks to regional lobby groups, the University of the West Indies (UWI), and Prof Brendan Bain.

At the very mention of the word 'homosexual', these champions began circling like lions ready to tear apart a prey, in this instance, the UWI and anyone who supported or called for the sacking of Professor Bain over testimony he provided in a case in Belize.

I know, on this little rock, our anti-gay reflexes are so strong that it's normal that, once gays take a position, that position MUST be wrong. However, let's try to pretend we are not the homophobic people we are just for a second and examine the issues.

Professor Bain was working on contract on a specific project funded by sources working to achieve the opposite of what he appeared to believe would be a good move. Yes, there is freedom of speech, but persons in certain positions must be responsible enough to understand that your freedom cannot always be exercised publicly, especially when your opinion is in conflict with your professional position. No matter how much a worker at Apple believes Samsung phones have a better interface than iPhone, that worker cannot publicly express that sentiment and keep that job.

Just recently, our champions of human freedoms circled to crucify LA Clippers owner Donald Sterling for statements made about blacks in the privacy of his home. How quickly they have changed their tune on freedom of speech!

However, I do not want to belabour the point of whether sacking Professor Bain was right or wrong. What has interested me in all this furore is the Chicken Little Syndrome. There were newspaper columns, editorials and blogs, as well as Twitter, Instagram and Facebook posts, about how the Jamaican society is in danger of falling prey to a gay agenda and how 'the gays are taking over'. I read them and I tried to understand why decriminalising consensual sex between two adult males would be detrimental to the society.

I asked around for reasons outside of the fact that it makes us squeamish and even repulses us in some cases. Over the years, the main reason I've been able to gather is that allowing gay men to have sex with other men will lead to decay in the morals of society. It appears from these arguments that Jamaica, as the last bastion of morality and values, must fight off this evil if we are to protect future generations.

This morality argument confuses me, because I look around in Jamaica and my first impulse is to ask whether our morals can actually decay any further. When we have songs with lines like "before mi tun a by man, mi prefer tun a raper', is there still room for further moral decay? What morals are we guarding when corruption, murder, child abuse and electricity theft have become the norm in Jamaica?

I see people talking about Jamaica needing to ensure it does not go the way of countries such as Canada, the United Kingdom, and the United States, and I think, I wish it would! Have you noted the quality of life for citizens in these countries, or their economic statistics lately? Has the sky fallen in these countries?

The other argument is that our boys will be in danger because, apparently, homosexual men have a special appetite for little boys. I would not deny that there will be some of that; in fact, I am sure it is already taking place. However, I do not believe that is a gay issue. My feeling has always been that at least half of Jamaican men are sexual predators and paedophiles. I know this is a grim view, but you only need to hear the many stories on the news about teachers sexually grooming female students.

Talk to the women around you. A large number of them have been raped or sexually abused as children or courted by adult men while still underage. Visit our women's centres and you will find most of the girls there are pregnant by adult men. Speak to some of the doctors who deal with children who are sexually abused and you will see that Jamaica has a problem with sexual deviants, which has nothing to do with homosexuality exclusively, as the majority of these cases involve little girls abused by straight men.

I will consistently maintain that this concern about young boys being abused is born from the fact that our boys are more valued than our girls in society. So there is this fierce move to protect our boys from being abused, but where is the equal vehemence in relation to protecting our girls? Where is the outrage when a young girl in the community ends up pregnant?

It's time for us to properly acknowledge and deal with the root problem rather than engaging in this use of smoke and mirrors to hide Jamaica's paedophilia problem.

It's said Professor Bain spoke an inconvenient truth, stepping on the corns of the gay lobby, when he stated his conclusion that even after decriminalising intercourse between men in some countries, HIV infections still remained high. However, is there any available evidence to show that homosexual men in the Caribbean are refraining from having sexual intercourse because of the existing buggery laws? Would these men suddenly start having sex because the law has been relaxed, or is there an underlying assumption that more men would 'convert' to homosexuality because the laws have been changed?

What many do not realise is that even with the laws banning buggery, homosexuals can, without penalty, influence the minds of our young, if that's what's feared. If two gay men want to stand in the middle of Half-Way Tree and kiss, they can. It would be foolhardy, but it is not illegal.

It is time for us to direct our energies towards a more constructive debate on the buggery law, devoid of doomsday fearmongering and religious fervour, and actually examine ways in which this society can cure its ills and encourage a more harmonious existence.

Debbie-Ann Wright is an editor at The Gleaner/Power 106 News Centre. Email feedback to columns@gleanerjm.com and debbie-ann.wright@gleanerjm.com.