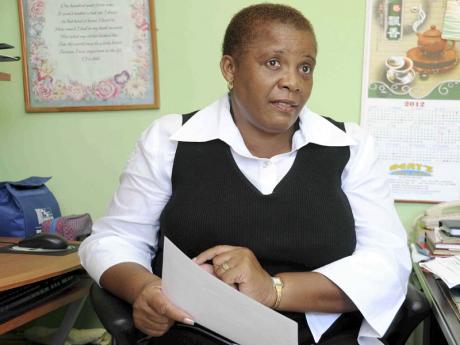 Carlene McCalla-Francis, the tough-talking taskmaster principal of Kensington Primary School in Portmore, has been credited with turning the institution into an academic standout. 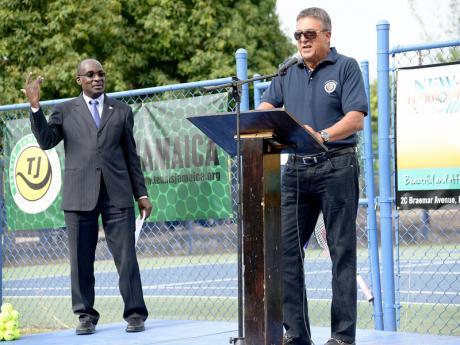 Ruel Reid (left), opposition senator and principal of Jamaica College, has been praised for his organisational skills in transforming the performance and discipline of the single-sex high school - with loads of help from old boy financiers like R. Danny Williams and Phillip Gore (at podium), who recently sponsored the rehabilitation of JC's tennis courts.-PHOTOS BY Gladstone Taylor/Photographer
1
2

John Fitzgerald Kennedy, the 35th president of the United States of America, once said, "Let us think of education as the means of developing our greatest abilities, because in each of us there is a private hope and dream which, fulfilled, can be translated into benefit for everyone and greater strength for our nation."

Most of us in academic circles are well aware of such profound encouragement. It is embraced by educators and politicians so much so that it has been the core ideology on which the US government has embarked on its transformation in education. Out of this ideology came the renewed interest in education by the US federal government and the springboard from which the No Child Left Behind Act was launched in 2001 under then President George W. Bush.

There is no doubt that Jamaica needs a similar ideology, one that will capture the minds of our leaders and educators of the nation. Far too few of our public schools are performing exceptionally well and far too many of them are barely struggling to meet the minimum targets set by the Ministry of Education.

So the billion-dollar question is: Why are so many of our high schools turning out students who woefully lack the academic qualification to matriculate at the tertiary level? What is the fundamental reason(s) behind so many of our brilliant minds graduating from high school without the requisite skills for the world of work? How on earth do students graduate from high school yet be classified as functionally illiterate?

While it is impossible to pinpoint a single reason or set of reasons for the failure of some of our high schools, there are some glaring irregularities and shortcomings which, in my opinion, have created, if not contributed to this untidiness. Today I focus only on high schools and what can be done to clean up some of the untidiness.

As the chief instructional leader, the principal is the single most important person who has the key to set the school on a path to high academic performance (Lunenburg & Ornstein, 2012). With such an important responsibility, it is only logical that prospective principals have some years of experience in the classroom and at least the requisite academic qualification, such as a master's degree in educational leadership.

Yet, what is evident in our school system is that some teachers, as a result of seniority, move into administrative positions with little knowledge as to how to transform a school. In addition, some of these principals are at a loss as to how to motivate staff, improve test scores, curb indiscipline, and capture important data to be used to improve the institution as a whole.

How do we rectify this problem? Simply put, the Ministry of Education needs to revamp the current practice of allowing school boards to determine the minimum requirements for school leadership positions. It is time to move away from the practice of one school board requiring candidates to have at least a bachelor's degree, while another is adamant about candidates holding at least a master's. At times, you may see the phrase, "A master's would be a distinct advantage."

With the minimum standard stipulated, the board of management of the school is now tasked with sifting through the applications, shortlisting, and interviewing the most qualified and competent persons for the post. The selected candidate (new principal) is then tasked with ensuring that students get the best education for every tax dollar spent.

A school principal is the primary leader in a school. Therefore, he or she must have a clear vision and achievable targets that are to be reached within a given time frame. Most important, that vision and practicable targets must be communicated clearly with all stakeholders of the school (Gorton and Alston, 2012).

As a leader, the principal is responsible for interviewing and selecting competent teachers to meet the academic needs of students, manage the financial affairs of the institution, develop a sustainable system which fosters discipline and lifelong learning among students, and most important, to develop an appraisal system to capture data on teacher performance while maintaining high staff morale.

Leadership style will vary from one school principal to the next. How the achievable targets are reached will depend on the quality of leadership and the effectiveness of the principal. However, the principal would do well to remember that a good leader leads by example. He or she should be positive, enthusiastic, must be on top of the day-to-day activities of the school, and give a listening ear to the views of teachers and students. As an effective leader, he or she should push for excellence among all staff members and students.

While there are other factors that contribute to the overall effectiveness of a school, all the research has shown that the principal, as chief instructional leader, is the single most important person who has the key to set the school on a path to high academic achievement.

Keven Jones is an educator and doctoral candidate. Email feedback to columns@gleanerjm.com and kojones55@yahoo.com.