More than 50 dead in flooding 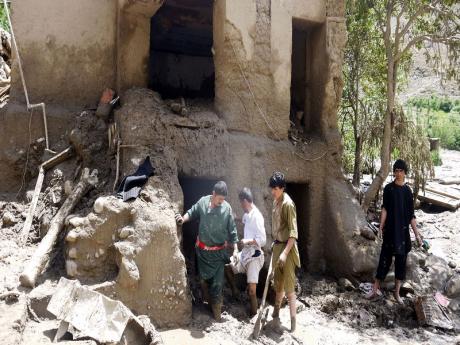 Afghans look for their belongings in their house damaged after flooding in the northeastern Baghlan province, north of Kabul, Afghanistan, yesterday.

KABUL, (AP):Flooding in a remote part of northern Afghanistan has killed more than 50 people and forced thousands to flee their homes, officials said yesterday.

It was the latest in a string of deadly flash floods, landslides and avalanches in Afghanistan's rugged northern mountains, where roads are poor and many villages are virtually cut off from the rest of the country.

The police chief in the Guzirga i-Nur district of the north-eastern Baghlan province, said 54 bodies have been recovered, including the remains of women and children, but many others are still missing. He said the death toll could climb to 100 and called for emergency assistance from the central government.

"So far no one has come to help us. People are trying to find their missing family members," said the police chief.

An exact death toll remained unclear. A statement from President Hamid Karzai's office said 58 people had been killed, while others put the toll higher.