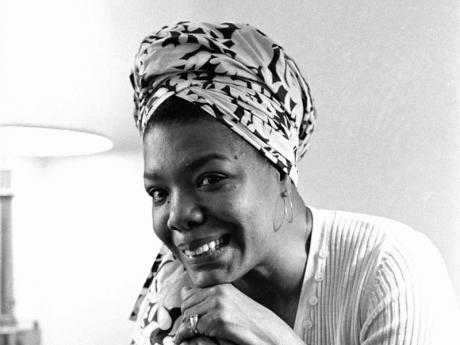 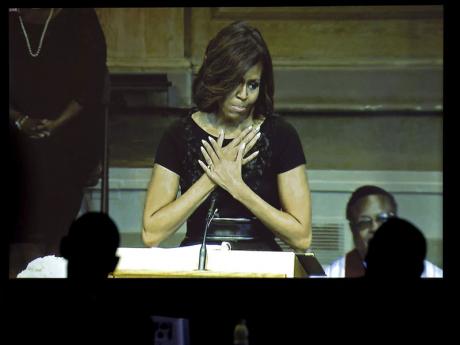 Media members watch on a screen as First Lady Michelle Obama speaks during a memorial service for poet and author Maya Angelou. 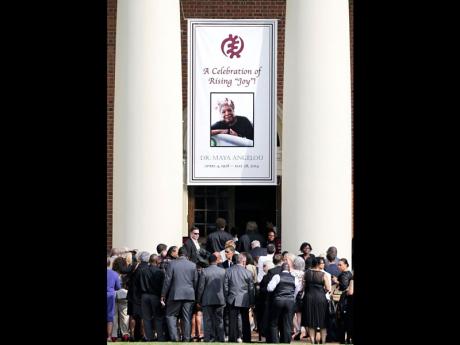 Mourners make their way into Wait Chapel before a memorial service for poet and author Maya Angelou.
1
2
3

WINSTON-SALEM, NC (AP):America's first Lady Michelle Obama lauded poet, orator and sage Maya Angelou as the first person who let her know she could be a strong and smart black woman.

The first lady was joining other famous admirers and friends in a private memorial service yesterday that was filled with tears, laughter, poetry and gospel singing.

Former President Bill Clinton said Angelou, one of the most famous black writers of the 20th century, was a woman who seemed to have lived five lifetimes in one. Others said the poet, who rose from poverty and segregation, gave strength to millions of women to live their lives in modern America.

Family, friends and admirers led by the first lady, Clinton and Oprah Winfrey paid tribute to Angelou at Wake Forest University in North Carolina where the writer had taught for more than 30 years. Angelou died May 28 at age 86 after a life with important roles in civil rights and the arts.

Obama told those gathered in a university chapel how reading Angelou's poem Phenomenal Woman changed a little black girl who grew up on the south side of Chicago and whose first doll was Malibu Barbie.

"She celebrated black women's beauty like no one had ever dared to before. Our curves, our stride, our strength, our grace," Obama told the audience, seated in wooden pews. "Her words were clever and sassy. They were powerful and sexual and boastful."

Tall and majestic, Angelou added heft to her spoken words with a deep and sonorous voice, describing herself as a poet in love with "the music of language".

In 1993, she recited the most popular presidential inaugural poem in history, On the Pulse of Morning, when Clinton opened his first term. She inspired many and became a mentor to Winfrey before she became a talk-show host.

Clinton remembered that voice, and how Angelou chose not to speak for five years after she was raped by her mother's boyfriend as a child.

"She was without a voice for five years and then she developed the greatest voice on the planet. God loaned her His voice," Clinton said. "She had the voice of God. And he decided he wanted it back for a while."

He also said she was a role model for many.

"We could just all be up here talking about how Maya Angelou represented a big piece of American history. And triumphed over adversity. And proved how dumb racism is," Clinton added.

The service was punctuated by several rousing gospel songs. There were tears, but laughter too, as Angelou's friends remembered a clever woman with a deep spiritual faith.

At the private North Carolina school, the writer was regularly addressed as Dr Angelou out of respect for all the honorary degrees she received even though she had never graduated from college.

Winfrey spoke of Angelou as her spiritual queen mother, saying she always took notes whenever they spoke on the phone. She cried a few times as she remembered how Angelou was a vital part of her career, reminding her of the millions of people she has touched through television.

Winfrey said she struggled to put what Angelou meant into words, then realised she owed the poet not words, but actions.

"I cannot fill her shoes, but I can walk in her footsteps," Winfrey said.

Angelou was born Marguerite Johnson in St. Louis and raised in Stamps, Arkansas, and San Francisco.

Her life included writing poetry by age nine, giving birth as a single mother by 17, and becoming San Francisco's first black streetcar conductor. She also once danced at a strip joint, shared the stage with comic Phyllis Diller and garnered career advice from singer Billie Holiday. She wrote music and plays, received an Emmy nomination for her acting in the 1970s TV miniseries Roots and danced with Alvin Ailey.

Her magnetism drew her into friendships with many famous figures, including Malcolm X and Nelson Mandela.