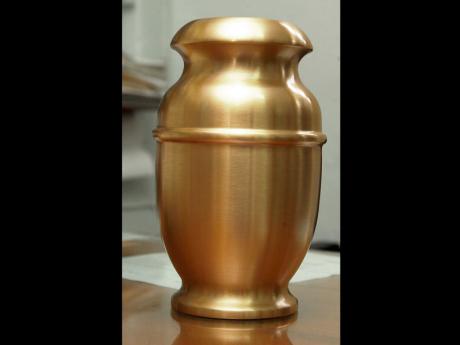 Jamaicans who opt to cremate the remains of their loved ones could be left holding urns with ashes from wood, animals or anything except the body they wanted to have cremated.

"I have heard of situations where funeral homes actually collect from family members for cremation and then give them back ashes, and if you were to really investigate, none of the three official crematoriums in Jamaica know about it," said Gordon Chuck, owner of the funeral directors and crematorium company Sam Isaacs & Son.

"And this is all due to the fact that the whole industry needs to be regulated and policed," added Chuck, as he told The Sunday Gleaner that he has heard of situations where family members have been led to believe wood ashes were that of their deceased loved ones.

"They have ways that they can trick persons, so I would say to the public to make sure that they know that the funeral parlour is capable of doing that cremation, and understand that a middleman exists when they don't own a crematory," said Madden.

According to Madden, he is concerned that unscrupulous persons could "bury the body in May Pen Cemetery", while giving family members an urn of ashes that are not those of their loved ones.

On average, the cost of cremation is $100,000, while a traditional funeral, without frills, could run a family upwards of $170,000, leading some persons to choose the former.

But the funeral directors say there can be many complications associated with this method of disposing of a body, not least of which is the commingling of the ashes.

Chuck said the commingling occurs when multiple persons are cremated at the same time with no possibility of separating the ashes.

Chuck blamed the problems associated with cremation on the fact that the local funeral industry is not regulated.

"With the whole cremation situation, there is no real regulation or regulatory body to make sure that these things are done or not done. In the United States, there are laws against commingling … and there are entities to make sure that it is not done," he told The Sunday Gleaner.

Locally, the closest thing to a governing body is the Funeral Directors Association of Jamaica, which is basically toothless, as there are no policy guidelines governing it.

According to the funeral directors, there are only three licensed crematorium operators in Jamaica: Sam Isaacs & Son, Madden's, and Honeyghan's Funeral Service and Crematorium.

Any other funeral parlour offering such services is required to do so with the help of one of these three; however, many of the funeral homes which have sprung up to capitalise on the booming death business have found ways around this.

President of the Funeral Directors Association of Jamaica, Melvin Honeyghan, whose funeral home and crematorium is located in Savanna-la-Mar, Westmoreland, says the problem is exacerbated by the fact that unlicensed practitioners are not only ignorant of actual crematory practices, but they are also unable to handle the paperwork.

"When I sit and analyse it, the problem is that a lot of these unscrupulous persons don't even know what to do to prepare a document for cremation, not even the slightest idea of the documents that they need to fill out."

According to Madden, "It all has to do with the economy of the country - the high soliciting by these people who come into the market. It is not something where you can create a market, the market share depends on the mortality rate of the country."

He added: "With all these little unscrupulous undertakers coming into the market and fighting against the established undertakers, they have to solicit by even vilifying. They get very aggressive now to get a job, taking the people and carrying them around like a con artist.

"Even if you look in the directory, you will see the number of undertakers offering cremation; it is a joke," added Madden.

With cremations increasing in popularity from 20:80 in previous years to a 50:50 ratio now, the funeral directors are urging Jamaicans to be cautious and check carefully before shelling out thousands of dollars to cremate a loved one.