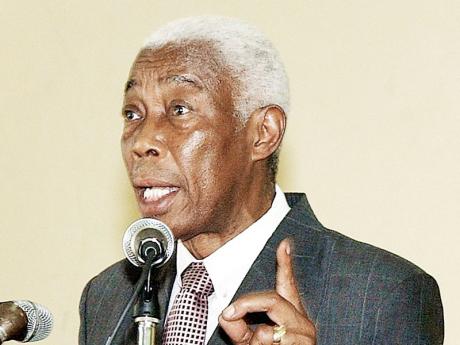 JAMAICA IS among the first 50 countries to ratify the landmark United Nations Arms Trade Treaty which is aimed at regulating the multibillion-dollar global arms trade.

Foreign Minister A.J. Nicholson told the Senate last Friday that Jamaica deposited its instruments of ratification of the treaty on June 3.

The United Nation's General Assembly last April adopted the treaty, and by June 3, some 40 of the 118 states which signed the treaty had ratified it. The treaty will enter into force after it has been ratified or acceded to by 50 states.

Reporting to Parliament on his May 26-29 trip to the 17th ministerial conference on the non-aligned movement in Algeria, Nicholson said Jamaica, along with fellow Caribbean nations Trinidad and Tobago and Guyana, welcomed the arms trade treaty as "an essential tool in curbing the illicit trade in small arms and light weapons".

"It was stressed that for small states such as Jamaica, the treaty has great significance in that it will assist us in dealing with the current threats that heighten our vulnerability and impede the attainment of sustainable goals," said Nicholson.

The treaty is aimed at reducing the global illegal weapons trade, which is estimated at between US$60 billion and US$85 billion per year. It will require countries that ratify it to establish national regulations to control the transfer of conventional arms and components and to regulate arms brokers.

The treaty also will foster peace and security by thwarting uncontrolled destabilising arms flows to conflict regions. It will prevent human-rights abusers and violators of the law of war from being supplied with arms. And it will help keep warlords, pirates, and gangs from acquiring these deadly tools.

Nicholson said that at the meeting reference was drawn to "the escalating situation regarding crime and armed violence in the Caribbean region as a whole", and that he asserted the importance of ratification of the treaty in order to bring its provisions into effect.

The United States of America and Brazil are among the countries yet to ratify the treaty.