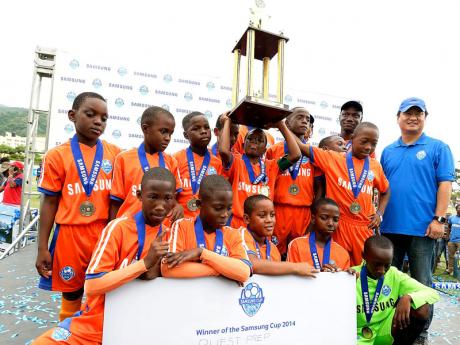 Members of the victorious Quest Preparatory football team celebrate with their winning trophy after capturing the Samsung Youth Cup at the University of Technology football field, Papine, yesterday. The trophy and cheque for US$20,000 worth of Samsung products were presented by Young Dae Sin (right), managing director of Samsung Electronics Latin America.-Gladstone Taylor/Photographer

Quest Preparatory are the all-island champions of the Samsung Youth Cup.

They defeated Howard Cook Primary 6-5 in a dramatic penalty shoot-out in the final at the University of Technology football field yesterday. The teams were locked at 0-0 at the end of full time.

The new champions claimed double the previously announced prize money and will now collect US$20,000 worth of Samsung products along with the coveted Samsung Cup.

Coach Errol White was pleased with the performance: "I feel good. This is for the boys. We plan to enjoy the win. Cheers to Quest."

Rivaldo Mitchell, the tournament's top scorer, noted: "I feel happy about the win, it was a hard game. They are just as talented as our team so we are happy we beat them."

Meanwhile, scorer of the final penalty, Blaine Bygam, said, "It was amazing to score the winning penalty and help my team win."

Penalty scorers for the runners-up were Alex Forbes who was also named most valuable player (MVP) on the day, Kashiev Rodriquez, Prince Christie, Nashawn Rowe and Carrick Stewart, while their top scorer Johane Fraser failed to convert from the penalty spot.

Rayon Taylor, the coach of Howard Cook, was gracious in defeat.

"Nobody likes to be runners-up, but somebody has to, unfortunately," he said.

Taylor added that his boys had done their best and had given good account of themselves. "Our boys are winners, not losers. They will definitely be back next year," he said.

Earlier, Mona Prep won the race for third when they clipped Fullerswood Primary 1-0. Mona's Duncan McKenzie scored the winner late in the second half.

McKenzie, while delighted with his goal, said: "I am very happy for scoring, but I would have loved to win the championship."