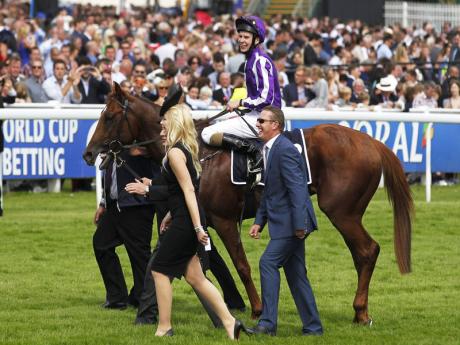 Australia and jockey Joseph O'Brien are led into the winning enclosure after capturing the English Derby at Epsom racecourse, England, yesterday.-AP

Sent off at odds of 11-8 and ridden by the trainer's son, Joseph O'Brien, Australia powered to victory in the final straight to triumph ahead of Kingston Hill and Romsdal in the mile-and-a-half classic.

"Joseph was very happy, he had in his mind where he wanted to be and he gave him a beautiful ride," Aidan O'Brien said after congratulating his son. "We always thought he (Australia) was very special, the way he's bred and the pace that he has."

Australia, who came third in the 2,000 Guineas at Newmarket last month, had a nearly flawless race and kept on well in the closing stages. The son of Galileo and 2004 Epsom Oaks victor Ouija Board hit the front over a furlong out before accelerating and moving clear of the 15-2 Kingston Hill.

John Gosden's Romsdal outran his 20-1 price to finish third, another 3-1/4 lengths away.

A crowd of more than 100,000 attended the race at Epsom, south of London, including Queen Elizabeth II, who returned from a three-day state visit to France for the 70th anniversary of D-Day.