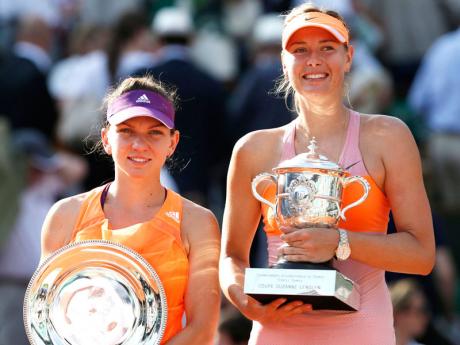 Serves hit by her surgically repaired shoulder often missed the mark, resulting in 12 double-faults. Shots that would be winners against most opponents were retrieved by Simona Halep and sent right back. Leads that usually hold up vanished in a blink. On a muggy afternoon, with the temperature in the high 70s (20s Celsius), points were lung-searing struggles.

Sharapova was up to the task. In an entertaining and undulating championship match - the first women's final at Roland Garros in 13 years to go three sets - Sharapova showed that she's as tough as they come, particularly on the red clay that used to flummox her. She edged Halep 6-4, 6-7 (5), 6-4 yesterday to win a second French Open title in three years.

"This is the toughest Grand Slam final I've ever played," Sharapova said.

It is her fifth major trophy in all. Remarkably, Sharapova owns twice as many from Paris as the one each she won at Wimbledon in 2004, the US Open in 2006, and the Australian Open in 2008.

"If somebody had told me ... at some stage in my career, that I'd have more Roland Garros titles than any other Grand Slam, I'd probably go get drunk," Sharapova said with a chuckle. "Or tell them to get drunk. One or the other."

The three-hour, two-minute tangle featured too many momentum swings to count, filled with lengthy baseline exchanges, and terrific defense and shotmaking by both women.

Not bad for someone who once famously described herself as feeling like a "cow on ice" when it came to playing on clay, a slow, demanding surface that requires excellent footwork. Now Sharapova knows how to move on clay, and can stretch points when needed. Since the start of 2012, Sharapova is 54-4 with seven titles on clay. She's also won 20 consecutive clay three-setters, including four in a row this week.

Sharapova broke into a huge smile while hoisting the trophy overhead, then shaking it with both hands and scanning a stadium that, improbably, has become hers. This was her third final in a row in Paris: She won the 2012 title to complete a career Grand Slam, then lost last year to Serena Williams, who bowed out in the second round this time.

Sharapova is 20-1 the last three years at Roland Garros - which is nothing compared to Rafael Nadal's 65-1 career French Open mark heading into today's final against Novak Djokovic, but certainly quite impressive.