James in race to play in Game 2 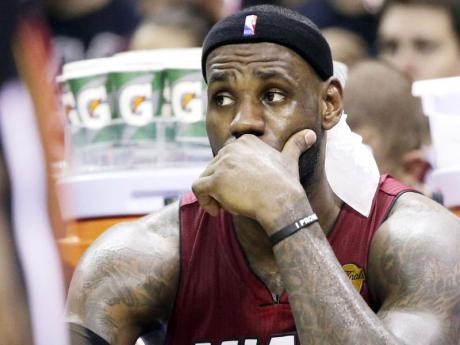 Miami Heat forward LeBron James watches action against the San Antonio Spurs during the second half in Game 1 of the NBA basketball finals last Thursday.

SAN ANTONIO (AP):If the NBA Finals resumed Friday, there would be no way LeBron James could play.

There's no game until today. And James plans to be ready by then.

With his gait still affected by severe cramping and dehydration, and feeling the effects of a sleepless night brought on by several trips to the bathroom, an unavoidable drawback of having his body filled with fluids, James insisted he will play when the Miami Heat and San Antonio Spurs get together for Game 2 of the finals.

When he was there on Thursday, the Heat were right there as well.

When he was done, so were the Heat.

Up by seven at one point in the fourth quarter, Miami fell apart in the final minutes and James' ugly departure could have easily had something to do with that. San Antonio's lead was 94-92 after James scored with 4:09 left; he was out of the game for good and unable to move 10 seconds later. From that point, the Spurs finished on a 16-3 run.

"He's a competitor at the highest level," Spoelstra said. "So it was killing him being on that sideline, but you also have your health to look after. Look, 99.9 (per cent) of people have never pushed their body to that level, at that level where you're past the point where your tank is empty and your body shuts down. For a competitor and for the best player in the game at this level to constantly push his body past that point, I think, is incredibly admirable."