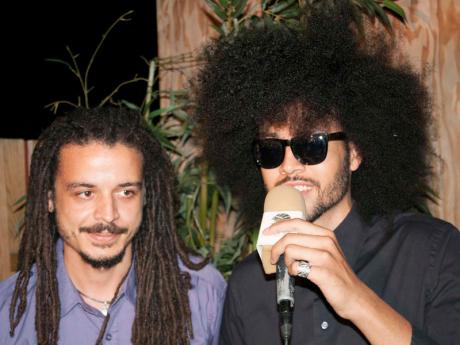 Skygrass guitarist Rasheed McCallum (left) looks on while lead singer, Simon Samuel, speaks during the launch of the video for their single 'IAmKing'. - Contributed

"I am King of my destiny." Strong words, but words we sometimes forget all the same, as we get caught up in the dramas, traumas, wrong turns and potholes that life sometimes offers. A reminder is always welcome, and the best reminders often come from music.

Skygrass' new single IAmKing presents an aggressive testament to fighting for what you believe in.

The song was written by Skygrass lead singer Simon Samuel.

"I was in a dark workshop engraving metal name tags for the deceased, sometimes doing anywhere from 30 to 80 a day. This forced me to really consider my own mortality daily, and I realised I had to move forward with purpose and make my life more meaningful to humanity," he said.

"I gravitated to the song IAmKing while on the road to recovery after battling with an illness that had me physically debilitated," said the director of a video for the song, Kyle Chin.

"I had already drawn motivation and strength from others, but had to find much more within myself to get better and not only to just recover but to be stronger than before. I set a goal, which was to win my first full-contact Chinese kickboxing tournament at the tail end of my recovery."

After being immobilised for weeks by this illness, Chin used the song as motivation to push forward.

"Throughout that training process, this was the song that I listened to the most in those midnight-hour training sessions and lonely moments in the gym, and on the day of the tournament, I won."

Chin was inspired to approach the band to bring the song to life in the form of a short film.

"The film/music video ties in with my own experience to a more relatable reality. It speaks to the power of self-motivation and integrity of a true regal nature," said Chin.

Produced by Analisa Chapman, the film was shot in one day across Kingston.

"The anxiety and excitement may have been doubled because I had invested so much of myself into the story and wanted to see it done justice," said Chin.

"Someone once told me that a good director knows how to assemble a good team. The team that came together to make this a reality was incredible and humble to boot. The energy on set was positive and the focus was singular".

The result is a video where Skygrass' powerful lyrics and instrumental delivery are perfectly complemented by Nile Saulter's spectacular cinematography and Chin's direction.