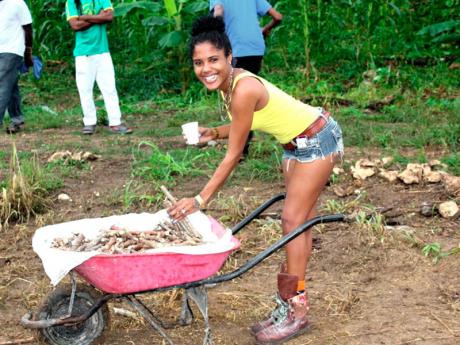 Denyque gets her hands dirty during Aristes for Agriculture at the Little Orchard Farm in Linstead recently. - Contributed

Artistes for Agriculture had its inaugural staging recently with organiser Jade Lee's objective being to promote agriculture through popular culture.

The Little Orchard Farm in Linstead was abuzz with activity as artistes gathered "to replenish Mother Earth" and give support to a cause they believe in.

The artistes then went into the field, planting suckers and seeds, personally labelling each. The highlight of the day was the planting of cassava sticks. All the musicians found themselves on all fours burying the sticks deep into the ground under the guidance of Neil and Damo Graham, Red Stripe's project lead for its cassava programme.

"It was very exciting to be a part of this inaugural Artistes for Agriculture, especially with Red Stripe's new focus on using locally grown cassava to produce our world-famous Red Stripe beer," said LeVaughn Flynn, senior communications manager at Red Stripe.

"I can't wait for the reaping in the next nine months."

The day was not just about planting produce as the artistes gathered in a communal setting, playing dominoes, football and holding reasoning sessions on the importance of agriculture to Jamaica's economy and national health index.

Naturally, food was aplenty with the ital chefs making good use of the produce available.

After sunset and the toiling of the artistes, their music took centrestage.

Lee, who owns and operates Little Orchard Farm, said this was the start of something great where she wants to use popular culture to promote farming.

"This is just the start of a very exciting journey and coming out of this event we will be producing a documentary that demystifies farming," said Lee.

"I want to show how fun and rewarding farming is and this documentary will be that conduit for people to look and see that this thing is actually doable."