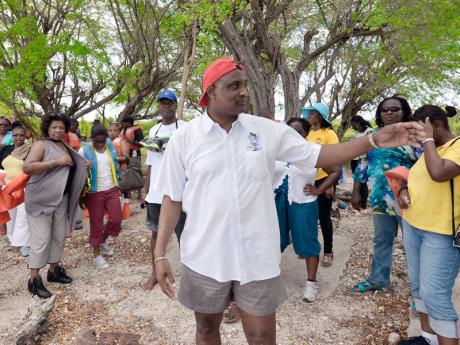 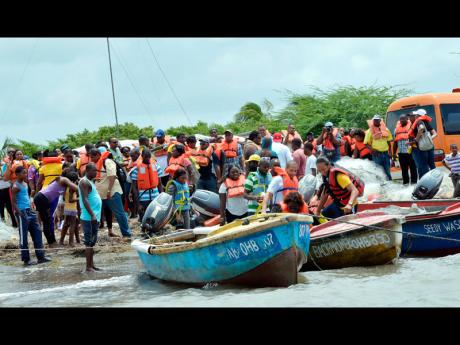 A touring party prepares for a trip to Little Goat Island, one of the proposed sites for aspects of the anticipated logistics hub.
1
2

A tour of Little Goat Island, one of the proposed sites for ambitious plans for a logistics hub, yesterday provoked more questions than answers.

An environmentalist who has now separated himself from colleagues in the field, has charged that despite the ongoing arguments and counter-arguments, both environmentalists as well as the Government were lost at sea in their search for the way to go in establishing a hub.

Cameron, who used his canoe to transport some members of the touring party, lamented that the Government had failed to effectively communicate to members of the public on the real deal as far as the proposed hub is concerned.

Dr Fritz Pinnock, director of the Caribbean Maritime Institute (CMI), continued to sound what has become his common refrain about the benefits of the hub but stayed clear of criticising the attacking environmentalists.

Pinnock stressed that the development of the Goat Islands was desperately needed, but questions were raised about his decision to take journalists and others on a tour of Little Goat Island where there was little evidence of wildlife.

Cameron suggested that the environmentalists were no clearer.

"I worked with them for more than 17 years, they spent too much time doing institutional work and administrative strengthening, but nothing measurable," said Cameron.

He was one of 20 fishermen who transported the more than 60 persons from Old Harbour Bay to Little Goat Island.

He said he was forced to break ties with the other environmentalists after nothing was achieved in years of non-stop talk.

"All we had was beautifully managed plans that fell way short and all we had to show for it after 17 years, are irons in the sea that stated 'No fishing'."

He charged that the environmentalists have not seen it fit and right to arm themselves with any collaborative plans.

"They are always so combative," he charged.

Cameron, whose knowledge of the area was obviously extensive, also had strong words for the Government.

He said while he was in support of the hub, as Jamaica has been starved of development, too much is hidden from the general populace which will enable them to make informed judgement.

"We are in serious problems in Jamaica and we hope that we can build a logistics hub and I am optimistic that we can mitigate some of the environmental challenges that will surface; but the communication from the Government side is lacking."

He complained that misinformation was also rife from both sides. The fisherman of more than 20 years dismissed claims by one of his colleagues who was assigned by the CMI to address the touring party. Cameron challenged that fisherman's claim that the sea in that area was devoid of quality fish life.

"It's simply not true, there is a prevalence of fish in this area. It may not be of the type to which we are accustomed, but they are there."

Pinnock was still unable to present a time frame within which the proposed hub will materialise.

However, the CMI, the region's premier logistics institution, appeared ill-equipped to transport would-be stakeholders into the Goat Islands.

With a yacht, which was earlier communicated to the media as the means of transportation out of circulation, the CMI was forced to utilise the services of approximately 10 canoes to transport persons from Old Harbour Bay into one of the former airbases.

But even with the glitches and hitches, Pinnock remained unrelenting as he declared that a new era demanded that Jamaica develop a hub in keeping with trends in global shipping and the logistics industry.