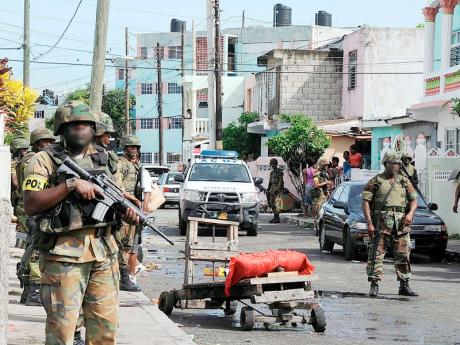 Security forces patrol Tivoli Gardens, west Kingston, in May 2010, shortly after an operation to serve an extradition warrant on Christopher 'Dudus' Coke.

Concerns are being raised that the gains made in reducing the crime rate in the West Kingston division may be eroding as the murder figures for the division have been trending up since the start of the year.

Serious and violent crimes for the police division were on the decline following the extradition of former West Kingston strongman Christopher 'Dudus' Coke, who is now serving time in a United States prison on gun- and drug-running charges.

Jamaica Constabulary Force's murder figures for the period January one to May 24 show that murders in West Kingston are up by 36 per cent. During the same period in 2013, there were 25 reported murders for the area; however, for this year, West Kingston has already recorded 35 murders.

Dr Herbert Gayle, social anthropologist and lecturer at the University of the West Indies, Mona, said this is not surprising, as the necessary interventions should have been made to build on the gains made after the extradition of Coke.

Back to rising crime

"Anywhere you use a heavy hand or anywhere crime is reduced too quickly without the necessary social-welfare strategies being in place, things will go back as they were," Gayle argued.

He told The Gleaner that the situation in West Kingston is rather complex, with various small communities scattered across the police division filled with residents whose needs are not being met by the State.

Gayle said dons such as Coke usually provide social nurturing for residents, and his removal left a vacuum that many lesser-known kingpins are jostling to fill.

"You have multiples of small communities where they may have their own leaders, and they create more blood than one big don," Gayle stated.

As a result, he said these communities needed to see more than the security forces on a daily basis because to the people in these areas, the kingpins were more than just security.

"They provided scarce resources, and this is needed to ensure that all factions are being catered to... . The country has not moved ahead to fill the gaps, to get people reattached. It's not just a matter of policing, but it is the rest of society that has to respond," Gayle posited.

Horace Levy, head of the Peace Management Initiative, who suggested that all the relevant state agencies needed to enter these communities and engage the youth more, supported Gayle's views.

Giving the police in the area an 'A' for effort, Levy said the situation is getting worse as the necessary interventions are not forthcoming.

He said, "Some criminal elements must be apprehended by the police through careful undercover investigation, which will be able to detect and lawfully remove those in the wrong."

Levy added that greater dialogue between the police and the youth is needed as many of them have indicated their willingness to turn away from the gang violence that has permeated the area for decades.

Amid continued violence, a joint police-military operation has been underway in West Kingston since last Thursday, targeting sections of the downtown Kingston market district, as well as the adjoining communities of Tivoli Gardens and Denham Town. The police said it is part of a sustained security initiative, dubbed Operation Resilience.