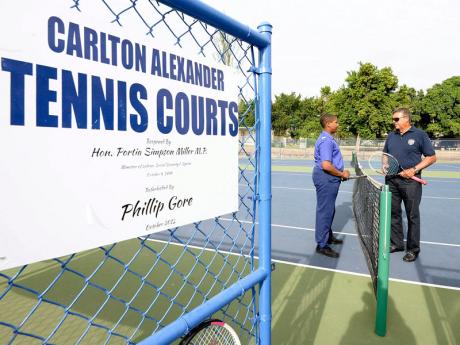 Although tennis has always been stigmatised as an elitist sport, in recent times the horizon for tennis players has been significantly broadened, as students can now access scholarships to pursue professional coaching.

Philip Gore has made this dream possible for the tennis team at his alma mater, Jamaica College (JC), with the opening of the refurbished courts for the JC tennis team.

Last Thursday, Gore, an avid tennis enthusiast and chairman of Gore Developments and director of Tennis Jamaica; members of the JC tennis team; and chairman of the sports committee, Ian Forbes, opened the gates of the newly refurbished tennis courts at a rededication ceremony.

"What better way to give back than provide the environment needed to create the next generation of tennis players?" said Gore, who is also the trustee/director of the scholarship fund which supports financially challenged students from elementary school to high school and positions them to win athletic scholarships to universities.

Gore told The Gleaner: "I'm sure that we're going to be talking more with the school as we want to continue our involvement with JC. We are very passionate - my wife, my son and I … the whole company - very passionate about education."

Gore hopes to help JC students excel in tennis both locally and internationally.

He added: "We're going to get the tennis programme started along with the coach, and I definitely want to make sure that it is a success."

Head of the sports committee, Ian Forbes, told The Gleaner that apart from the team, the newly refurbished tennis courts benefit the school aesthetically as the new auditorium looks pristine and the courts add to the ambience.

"With respect to the tennis programme, there are two regulation courts in very good condition, and this will encourage our young men to come out and hone their skills. The team has been doing well in tournaments and we expect them to do even better with the refurbishing of this facility," Forbes said.