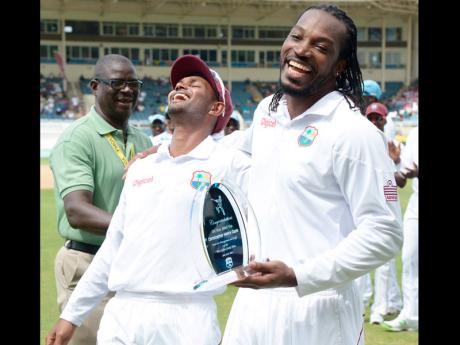 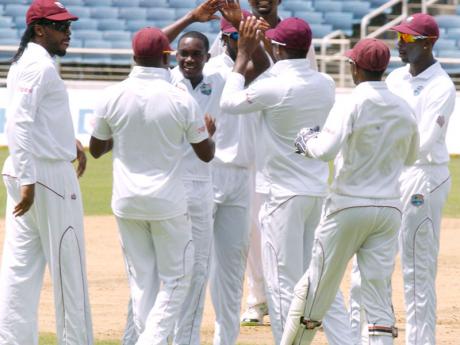 The much-anticipated first cricket Test match between the West Indies and New Zealand, which represents Chris Gayle's 100th in the longest format, got going at Sabina Park yesterday.

However, the start that many West Indians were hoping for, especially those who turned up, did not materialise, with West Indies and Gayle not batting first up, and New Zealand finishing the day in a very strong position at 240 for two.

Leading the way for the Kiwis, who won the toss and elected to bat, was 23-year-old batsman Kane Williamson, who put in a patient and stroke-playing batting display to close on 105 not out. This was Williamson's sixth Test hundred.

He was supported by 22-year-old opener Tom Latham, who fell 17 runs short of what would have been his maiden Test century in only his second match.

"We are in a good position, and the plan is to come out tomorrow and push our advantage," said Latham.

"Heading into the match, we talked about playing a lot of spin, and I think we played the spinners well," he observed. "We kept denying them, despite them, at times, bowling in good areas."

Williamson stroked 11 fours in a 263-ball knock, while the left-handed Latham hit 10 fours off 206 balls.

Opener Peter Fulton, who was caught behind by wicketkeeper Denesh Ramdin for one off Jerome Taylor's outswinger with the score on nine in the ninth over, is the other batsman to be dismissed.

The home team, in the meanwhile, was spearheaded by fast bowler Taylor, who, in his first Test in close to five years, finished with the impressive figures of one for 22 off 17 overs.

However, the rest of his teammates were not outstanding, as opening bowler Kemar Roach and spinners Shane Shillingford and Sulieman Benn could not force the New Zealanders into making false strokes.

Shillingford, who was playing his first Test since November last year, did not look as sharp as he did before being summoned by the International Cricket Council (ICC) for a bowling action review late last year.

The same could also be said of left-arm spinner Benn, who has been out the team for nearly four years.

Shillingford, who noticeably tried to adapt a more side-on bowling action, finished with one for 62 off 24 overs, while Benn, who was used as the opening spinner, ended without a wicket and went for 75 runs off 28 overs.

Roach, who was also making a return to first-team action after being out for close to a year due to a shoulder operation, started off well in his opening five-over spell, but thereafter petered out into medium-paced bowling. He conceded 56 runs and is yet to claim a wicket, off 17 overs.

"I think they took the last two sessions away from us," said Taylor. "But it's a game of cricket. It's a five-day game and we still have four days to go, so you may never know.

"Tomorrow can be a totally different day and I think the guys are looking forward to that," said Taylor.

Play in the five-day encounter is set to resume today at 10 a.m.