Court: Children over 21 go to back of visa line 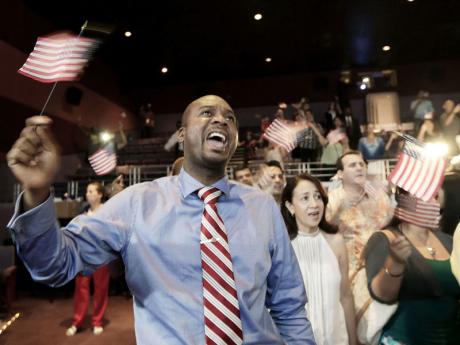 Jean Naason, 39, of Haiti (left), waves an American flag during a naturalisation ceremony administered by the United States (US) Citizenship and Immigration Services last week in Miami. Fifty candidates from various countries became US citizens in celebration of the launch of the first annual Immigrant Heritage Month. AP

A divided Supreme Court ruled yesterday that immigrant children who waited for years with their parents to obtain visas still have to go to the back of the line when they turn 21.

In a 5-4 decision, the justices sided with the Obama administration in finding that immigration laws offer relief only to a tiny percentage of children who "age out" of the system. The majority no longer qualify for the immigration status granted to minors.

The case involved Rosalina Cuellar de Osorio, a Salvadoran immigrant who was in line for a visa along with her 13-year-old son. But after years of waiting, her son turned 21 and government officials said he no longer qualified as an eligible child. He was placed at the back of the line, resulting in a wait of several more years.

The family won its challenge before the ninth United States (US) Circuit Court of Appeals, but the Supreme Court reversed that decision.

Writing for the majority, Justice Elena Kagan said the law directs immigration officials to automatically convert a 21-year-old child's petition into a category for adults. The only immigrants who can maintain their spot in line are those who would already qualify under the valid new adult category.

The case does not have any impact on the recent influx of thousands of immigrant children travelling on their own to cross the US border from Mexico.