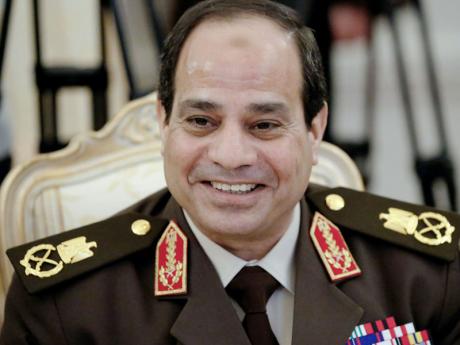 Egypt's new president, President Abdel-Fattah el-Sissi, asked the prime minister to form a new Cabinet yesterday, moving ahead with the transition as a court sentenced more than 100 supporters of the ousted Islamist president to a year in prison in the country's latest mass trial.

The interim prime minister, Ibrahim Mahlab, submitted his and his government's resignation, a ceremonial step after the inauguration of a new president. State TV said el-Sissi asked him to return to the post and form a new government.

Mahlab has served as interim premier for the past five months, the second person to fill the post since el-Sissi ousted Egypt's first democratically elected president, Mohammed Morsi, last summer following massive protests against the Islamist leader and his Muslim Brotherhood.

In his speech after his swearing-in on Sunday, el-Sissi vowed to build a more stable future after three turbulent years. He said there will be no tolerance to those who took up arms against the government and Egyptians, a thinly veiled reference to Morsi's supporters. The government has branded the Brotherhood a terrorist organisation, an accusation the group denies and says is intended to justify eliminating it as a political force.

Since Morsi's removal last July, his supporters have held near daily demonstrations, which have been met by a fierce crackdown by security forces that has killed hundreds and arrested thousands.