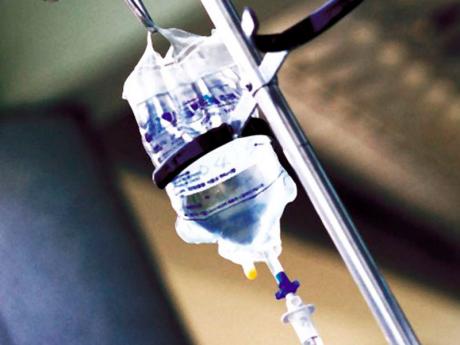 A SEVERE shortage of intravenous fluids which had impacted two-thirds of United States hospitals in February is now being felt in Jamaica's public hospitals, with a well-placed source revealing that the life-saving fluid ran out at the Spanish Town Hospital last week.

"If a patient comes in with gunshot wounds or stab wounds and the pressure is low, intravenous fluids are what we give them, initially ... . People are going to die if we don't have the fluids. The entire health sector is going to be affected," the source, who asked not to be named, told The Gleaner.

The Gleaner contacted the chief executive officer at the Spanish Town Hospital, Petakaye Sinclair Hamilton, who said she was not aware of the shortage of intravenous fluids. She advised our newsroom to contact the South East Regional Health Authority (SERHA), the body with responsibility for health facilities in the southeastern part of the country. However, efforts to get a comment from SERHA were futile as the acting board chairman could not be reached.

The National Health Fund (NHF), which now has responsibility for the management of pharmaceuticals in the public health sector, was also contacted by The Gleaner for comment on the shortage of intravenous fluids locally, but it advised us to submit a request for response through the Access to Information Act. This process can take more than 30 days before an answer is provided.

Subsequently, the communication arm of the health ministry sought information from the NHF and advised that a response would be provided today.

However, a senior administrator at the Pharmaceutical Division of the NHF, late last week, had refused to go on record but admitted that there was a shortage of intravenous fluids.

A reliable source at the Spanish Town Hospital, who is a medical practitioner, told The Gleaner that the institution's supply of 0.9 per cent normal saline and lactated ringers dried up last week. Lacated ringers are another type of intravenous fluid.

Noting that the intravenous fluids were critical to saving lives during an emergency, the concerned source explained that the management of the hospital was advised from earlier this year that a shortage of the fluids was on the horizon, as the US producer was struggling to satisfy local demand in the US.

Intravenous fluids are used for moderate to severe cases of dehydration and may be used in a case where an individual has a very high sugar level. The fluid is also used when operating on patients and is administered during invasive procedures such as washing off the stomach. The 0.9 normal saline is also reportedly used with ventolin to nebulise patients with asthmatic conditions.

A News@JAMA article out of the United States in May indicated that in February, a significant number of hospitals in America had been affected by a shortage of intravenous fluids.

Bridget M. Kuehn reported that the US Food and Drug Administration (FDA) had allowed Baxter Healthcare Corporation to temporarily import intravenous saline from its manufacturing plant in Spain to help ease an ongoing intravenous fluid shortage in the United States. The agency is also permitting the importation of a saline product from Norway.