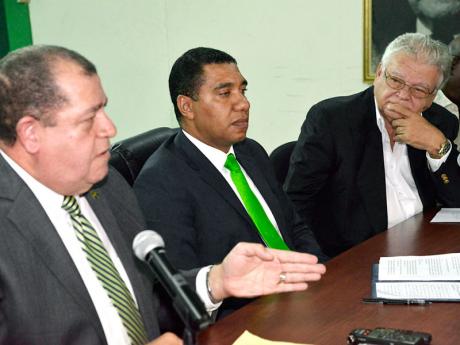 THE COUNTRY'S parliamentary Opposition has signalled that it is withholding its support for the Electricity Sector Enterprise Team (ESET), the panel appointed by the Government to oversee construction of the 381-megawatt power plant.

Blasting the appointment of the Dr Vin Lawrence-led panel as premature, Opposition Spokesman on Energy Karl Samuda said the move raises several troubling questions about the future of the project, which has become a critical component in the Government's plan to reduce energy cost.

ESET was established after EWI, the company that was granted a licence by the Office of Utilities Regulation (OUR) to develop the new electricity baseload project, failed to meet the deadline to pay the required performance bond.

Energy Minister Phillip Paulwell has since written to EWI serving notice of his intention to revoke the licence, but it is not clear whether the permit has been rescinded. The process was being managed by the OUR.

NO WORD FROM CABINET

But Samuda, who was speaking during a press conference at the Jamaica Labour Party's St Andrew headquarters yesterday, said there has been no word from the Portia Simpson Miller administration to indicate "unequivocally" that the revocation of EWI's licence has been finalised.

In addition, he said the country has not been told what will happen should EWI come up with the US$37m bond before the deadline set out in their contract with the Government.

"Is it that the Government intends to reject it and go to a new bid? And, is that bid to be by public tender or by sole-sourcing?" Samuda questioned.

Opposition Leader Andrew Holness also used the word premature to describe the appointment of ESET, asserting that the Government should, instead, focus on ensuring that the OUR and other prescribed state entities carry out their functions effectively.

"The existence of an enterprise team when there is a body already set up for that in law suggests that the body isn't working. What is the prime minister doing to ensure that the OUR can work and is working?" Holness demanded.

"It is not her duty to go and set up some parallel organisation that they can control. We cannot support the enterprise team ... ; it should not be in existence," he added.

Holness argued that the creation of ESET could prejudice the possible revocation of the licence granted to EWI and that it "flies in the face of good governance".

"What is the purpose of spending hundreds of millions of dollars to have a regulator and you can't use them?" he questioned.