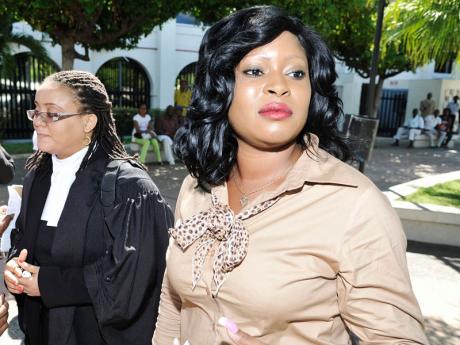 Shanique Myrie (right) as she left the Supreme Court in downtown Kingston after the verdict in her favour almost a year ago. With her is attorney Michelle Brown. - File

Shanique Myrie, the Jamaican woman who won a landmark discrimination case against the Barbados government, says she is now very frustrated that eight months after the ruling, she cannot collect money awarded to her.

Last October, the Caribbean Court of Justice ordered Barbados to pay J$3.6 million arising from the case in which Myrie claimed she was discriminated against because of her nationality when she arrived in Barbados on March 14, 2011.

Myrie said she was subjected to a body-cavity search in unsanitary and demeaning conditions before being detained and deported the next day.

Today, Myrie says she is concerned that she has been waiting for so long and that there seems to be no urgency from the Barbadian or Jamaican government to have the matter settled.

Myrie says her lawyer, Michelle Brown, spoke to the Barbadian authorities last month but without any success.

In March, Foreign Affairs Minister A.J. Nicholson read out in the Senate a response from Barbadian Prime Minister Freundel Stuart regarding an update on payments Myrie.

At the time, Nicholson also said five months after the ruling was not a long time to be waiting.