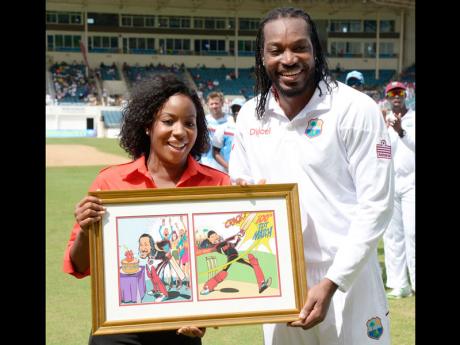 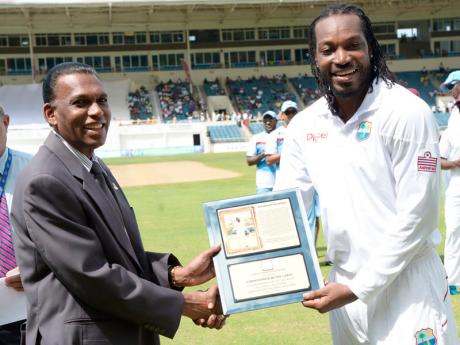 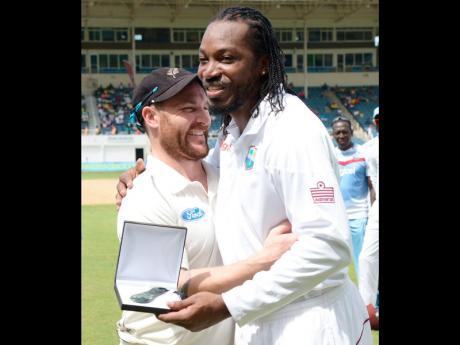 Brendan McCullum (left), New Zealand's Test cricket captain, presents Chris Gayle with a memento on his 100th Test match appearance prior to the start of the first Test between the West Indies and New Zealand at Sabina Park on Sunday. 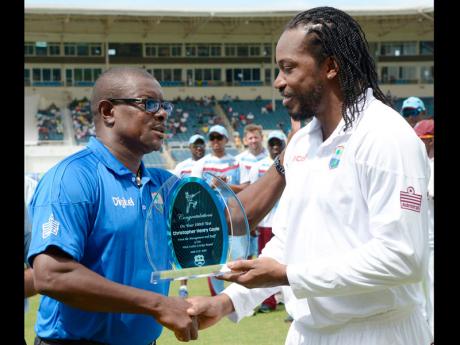 Former West Indies captain and current team manager, Sir Richie Richardson, presents Chris Gayle with a plaque in recognition of his 100th Test cricket match appearance, just before the start of the first Test match between the West Indies and New...
1
2
3
4

Chris Gayle remembers his first Test match well. He smiles when reminded about the 33 runs he scored against Zimbabwe in Trinidad and Tobago 14 years ago.

Now, 6,900 runs later, as he plays his 100th Test, the Digicel Ambassador is calm, proud of his achievements, and is looking forward to enjoying the milestone.

Describing it as an honour and privilege, he's excited about reaching a century of Tests at home against New Zealand.

"To actually be here among your friends and family and your home fans, to watch you play on an occasion like this, it's fantastic," he exulted on Sunday at Sabina Park, prior to the start of the first Test against New Zealand.

"A lot of people would love to see Chris Gayle get a big one on his 100th Test match, but I'm just going to play according to the situation," he explained. "What is to be will be."

He plans to give 100 per cent, as he always does. Even though the milestone is his, he is thinking team.

"What would be fantastic", he pondered, "is actually to win the Test match and that would be something even more to talk about.

"I'm looking forward to it and going to enjoy it."

A career decorated by 18 Test centuries has many batting highlights. Yet the soft-spoken ambassador does have a favourite. It's his 333 against Sri Lanka in November 2010.

Next in the pecking order is his 317 against South Africa in the 2005 home series.

Another memorable moment came in November 2012 in a Test series against Bangladesh. The home side opened the bowling attack with a spinner.

"I thought it was a bluff," he remarked. "I said I'm going to put the pressure on him from ball one. The field was actually in so I went for it and that was it, really, but I didn't know it was history."

It was. No one in the history of the game had ever hit a six from the first ball in a Test.

He loves Test cricket and speaks about it passionately. "The game of Test cricket is like life off the field. You test your character out there. You test your strength, your mental strength and your body as well", he said with a gleam in his eye. "Just like life, things might be going good for you, but you're going to have that time when you need to pick yourself up and with no one to help," he said as he likened the game to everyday living. "So you've got to be the person out there to lift yourself," he charged. "And that's what Test cricket is all about."

It's a little known fact that his batting average is higher in Tests than in any of the game's shorter forms.

Avid fan as a youngster

Gayle reflects he was once much like the youngsters who will come to Sabina Park to watch historic 100th Tests.

"When Brian Lara got a double against Australia, I was in the mound, the party stand. I didn't think I was going to play with those guys. In maybe a year or so, I'm sharing the same dressing room.

"So for the kids out there," he counselled, "Trust me, you never know what the future holds for you."

He advised youngsters to stay positive, grounded and respectful.

"Respect the game and don't try and take it for granted," he advised.

Last Thursday, Gayle, a former Windies skipper, opened a cricket academy at Lucas Cricket Club, where his own career began. He is happy to give back to the sport.

"As a child, I didn't get those sorts of things," he reminisced. "I'm happy to use these academies to guide kids, guide them accordingly, not necessarily in cricket, but in life on a whole."

He's thankful to everyone who helped him along the way to his milestone, including telecommunications giant Digicel, which is a major sponsor of West Indies cricket.

"The partnership has been really really strong and I really want to thank them for helping me in every cause," he said.

Gayle is particularly pleased about Digicel's involvement in the sport he loves. He also referred to their sponsorship of the West Indies team, individual players like himself and Marlon Samuels, and programmes designed to raise the standard of play, as being helpful.

"They've been very, very helpful with the development of cricket," he observed. "That's where my area is, to develop the game of cricket and to use this scenario to build upcoming kids."