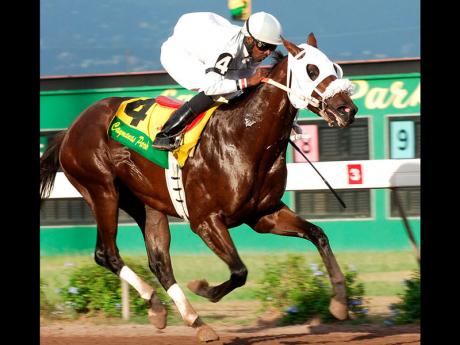 "The papers are being looked about," Kirlew said, referring to clearance the American Hall of Famer will need from the Jamaica Racing Commission to partner two of his runners on Saturday - TALENTED TONY K in the Derby and ZARIAHRICHIEDIAMOND in a non-winner-of-two for three-year-olds.

Prado's booking signalled the end of a tug-of-war involving trainer, owner and two jockeys as to who would be aboard the speedy colt on Saturday.

Kirlew was heavily leaning towards Shane Ellis after the two-time Derby-winning jockey edged home astride TALENTED TONY K in the May 24 Lotto Classic Governor's Cup, beating RELAMPAGO by a short head, allowing his rival 16lb.

Ellis rode the colt in the absence of regular rider Omar Walker who - three weeks earlier - had moved his tack to Assiniboia Downs (ASD), Winnipeg, Canada, after winning April's 2000 Guineas astride the speedster.

The Derby ride, however, as far as owner 'Jigzy Blade' was concerned, was still Walker's, as he felt he owed it to the jockey who had given up an entire of barn of horses at 14-time cham-pion trainer Wayne DaCosta to ride his MISMYRTLEBOYRICHIE in 2011.

Kirlew, on the other hand, hailed Ellis' Governor's Cup victory as "one of the biggest rides" he had ever seen in his life and said he would have spoken to Jigzy Blade about who would partner TALENTED TONY K in the Derby.

Days later, he declared that an agreement had been reached with the owner and told the press Ellis would be the Derby jockey.

It turned out, however, that the colt's owner had every intention to remain loyal to Walker who, by then, was turned off by what he was hearing and declined the ride, saying he was settling into a barn at ASD.

Ellis, after learning that the horse's owner was set on Walker, jumped ship to Anthony Nunes' RELAMPAGO, leaving TALENTED TONY K without a rider.

Jigzy Blade, The Gleaner was told, tried booking Jamaican Rajiv Maragh, who rode WICKED STRONG to a fourth-place dead heat finish with CALIFORNIA CHROME in Saturday's Belmont Stakes, but his asking fee was over the top.

Meanwhile, Prado, who won the 2006 Kentucky Derby with BARBARO, is due in the island on Thursday. Though he did not ride in Saturday's Belmont Stakes, among his more than 5,000 career winners he has twice stopped horses headed for United States Triple Crown glory.

In 2002, Prado won the Belmont aboard SARAVA, at odds of 70-1. Two years later, he denied SMARTY JONES Triple Crown immortality by narrowly winning the Belmont with BIRDSTONE.