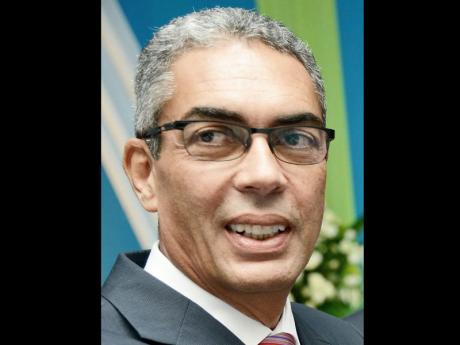 There needs to be a further 5.5 per cent depreciation in the value of the Jamaica dollar against the United States (US) banknote for the country to remain competitive, according to co-chairman of the Economic Programme Oversight Committee (EPOC), Richard Byles.

Analysis of the required further reduction in the value of the local currency is based on data provided by the Bank of Jamaica (BOJ), which show an 11 per cent depreciation during fiscal year 2013-14, and an inflation rate of just over eight per cent, compared with United States inflation of 1.5 per cent.

Based on the BOJ's historical foreign exchange rate, the average selling rate of the Jamaican currency was $109.57 to US$1 at the end of the fiscal year ended March 31, 2014.

Byles said that with the 11 per cent depreciation, and considering the inflation rates in the United States and Jamaica there was a differential of 6.5 per cent, which meant Jamaican producers had a 4.5 per cent competitive gain on its major trading partner.

Citing the example of Trinidad, from which Jamaica imports a lot of consumer products, he said that with that country experiencing inflation of 4.5 per cent during the fiscal year, it meant there was a 3.5 per cent inflation differential between that country and Jamaica, and hence the latter had a 7.5 per cent competitiveness gain on imports from the Caribbean island.

Byles was speaking against the background of a recent statement by (BOJ) Governor Brian Wynter that given the amount of depreciation in the Jamaican dollar vis-a-vis the United States dollar, especially over the last 12 months, "it was the opinion of the Bank of Jamaica that we were approaching a competitive foreign exchange rate, and, therefore, depreciation of the currency going forward should be limited to merely the differential between Jamaica and its trading partners."

He argued that the depreciation "more than made up for the fact that we have more inflation than the US. So there is a 4.5 per cent competitive gain for every exporter and for every Jamaican producer who is competing against imported products."

While noting that anyone who is exporting to Trinidad is 7.5 per cent better off, he said producers in Jamaica should also be getting more efficient.

"So we expect that on top of that competitive advantage being delivered by the exchange rate that their factory efficiency, their production efficiency would have improved and given them an even bigger competitive margin," Byles said as he addressed a media briefing at Sagicor Life Jamaica, New Kingston, where he released EPOC's 13th communiqué on its monitoring of the economic support programme between Jamaica and the International Monetary Fund (IMF) yesterday.

According to the co-chairman, "I think this is really important because we pay a heavy price every time the currency depreciates and we need to know that there is an objective, a reason, there is a goal in mind and the goal in mind is to make our producers more competitive so that we can export more and that we can compete against imports better."

Noting that the central bank is predicting that inflation should be somewhere between seven and nine per cent during fiscal year 2014-15, Byles said "if Jamaica manages to come in at seven per cent next year, and the US comes in at 1.5 per cent, that means there is a 5.5 per cent difference between us."

Given that the last fiscal year the Jamaican dollar depreciated by 11 per cent, "to simply keep our present competitive position ... Jamaica only needs to devalue (by a further) 5.5 per cent," he explained.

Byles, who is also president and chief executive officer of Sagicor Group Jamaica, said the governor's statement on the depreciating dollar was important "because a lot of people have said to me that one of the most debilitating things about this economic programme" is the depreciation of the currency.

"And what is being said is that that devaluation process is beginning to slow, or should begin to slow and gets slower and slower as our inflation comes down more and more," he added.

"Indeed, the governor went on to say that a primary objective of the BOJ in this fiscal year is to fight inflation. So they are turning their focus on trying to keep inflation as low as possible," Byles said.