NZ in command - But late wickets give WI hope 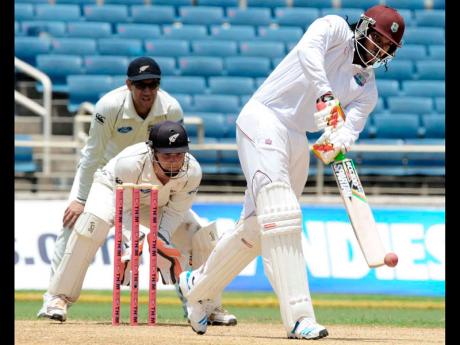 AT the end of yesterday's third day of the first Test between West Indies and New Zealand at Sabina Park, the home team was staging a fightback.

However, it's still New Zealand's match to lose.

The tourists, with eight second-innings wickets intact and two days remaining, hold a hefty 260-run lead after posting 508 for seven declared then dismissing the West Indies for 262 runs on the back of an outstanding spell of fast bowling by Tim Southee, backed up by debutant off-spinner Mark Craig.

Southee took a remarkable four for 19 off 16.2 overs, nine of which were maidens; while Craig ended with four for 91 off 24 overs.

"New Zealand is right now in the driver's seat," said West Indies batsman Chris Gayle. "They bowled well and very disciplined with their line and lengths and they were backed up in the field.

"However, come tomorrow, the hope is to build pressure and limit them as much as possible."

Spearheaded by fast bowlers Jerome Taylor and Kemar Roach, the West Indies then picked up twowickets in late evening to have New Zealand hobbling at 14 for two in their second innings.

Taylor started the Windies fightback when he had opener Peter Fulton caught behind for nought off the second ball; then Roach got a ball to come back from outside the off-stump to bowl first innings centurion, Kane Williamson, for two.

The wicket fell with the score on seven and resulted in huge celebrations by the team - and the gathering - most of whom had earlier turned out to see Gayle bat.

Playing in his 100th Test, Gayle made a second highest score for the West Indians, 64.

Vastly experienced 39-year-old batsman, Shivnarine Champerhaul, in an innings which again epitomised his value to the team, ended as the West Indies' top run-scorer with an unbeaten 84.

Resuming on 19 without loss, Gayle and Kieran Powell gave their team a decent start, adding 60 before the latter was dismissed by the LBW route to Craig for 28.

The West Indies plunged into deeper trouble with the fall of two quick wickets - Kirk Edwards (0) and Darren Bravo (0) - for the addition of one run.

The dismissal brought about a hush around the ground, as with the score on 61, the West Indies needed a solid partnership.

Gayle and Chanderpaul put on 53 for the fourth wicket with the former, who gradually grew in confidence, bringing up his 50 with a fluent off-drive just before lunch.

He first raised his bat to supporters in the George Headley Stand, where it is understood most of his family were, then to the Kingston Cricket Club stand and thereafter, the North Stand, which is the only other that is open for the match.

The party mound stand is closed, due to renovations in preparation for the installation of floodlights at the venue.

The partnership, however, was broken shortly after the lunch break when Gayle, who had earlier in the day struggled somewhat with the pace of Tim Southee, held out to the speedster.

The big left-hander, playing inside the wrong line, only succeeded to edge to Watling with the New Zealand players and sprinkled flag-waving supporters in the stands, jumping in delight.

It also ensured that his hope of reaching 7,000 runs in Tests was delayed yet again, after falling three runs short of the target.

His tally allowed him to surpass Australian legend Sir Donald Bradman's 6,996 runs, made in 52 Tests.

A steady flow of wickets followed Gayle's dismissal, with none of the other batsmen able to keep Chanderpaul's company.

The reliable Guyanese batted through the innings and counted 13 fours in his 227-ball innings, as he ran out of partners.

"It was a good showing from us from the start," said Craig. "We did not allow them to get into any sort of rhythm and bowled in some pretty good areas."

He added: "It all comes down now to tomorrow and what we do, and the intention is to put up as much runs as we can before declaring."

Latham, not out eight and nightwatchman, Ish Sodhi, not out four, will resume batting when play resumes at 10 a.m. today.

S Chanderpaul not out 84

T Latham not out 8

I Sodhi not out 4