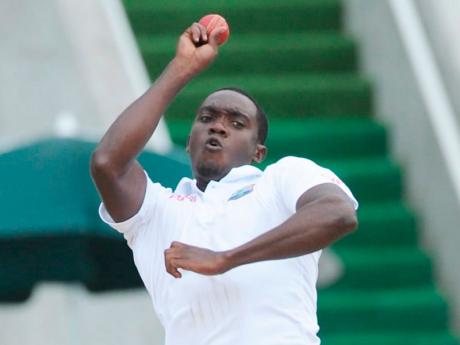 Bowling a mean line and length and getting the ball to shape in and out at will, Taylor, playing in the ongoing first Test against New Zealand at Sabina Park, conceded a meagre 37 runs from 26 overs at an economy rate of 1.42, while taking a wicket.

He also bowled 11 maidens during his spells, which accounted for close to half of his overs.

"It was good for me coming back and ending in the wicket-taking column, and generally giving a good display of myself," said Taylor, who, on Sunday's opening, day finished with one for 22 off 17 overs.

"There is still, however, room for improvement and a lot of work to be done."

Taylor, who was playing his first match since late 2009, finished as the most economical of West Indies' lead bowlers.

Left-arm spinner Sulieman Benn, who claimed three wickets for 75 runs, ended with an eco-nomy rate of 2.73.

"Physically, I think I am there as the body is reacting to the stress that I have been putting it under," said Taylor.

"Also, it is not just my body that has been responding pretty well, but I am feeling well within myself."

The 29-year-old also credited his Jamaica and West Indies handlers for his success.

Taylor, while representing Jamaica, finished among the top 10 wicket-takers during the regional one-day and four-day tournaments.

"The regional tournament was good for me and was a build-up leading to here," he said.

"The physical trainer (David Bernard Sr) and management staff (of Jamaica), I think they managed me well, along with the captain.

"Here (West Indies team) is no different. I think the management staff and the coaching staff are trying to do the same thing as well.

"As we go along, we are going to gradually improve, and hopefully, we can continue to grow from strength to strength and things get better from here on in," admitted Taylor.