Chen explodes with 94 at shotgun champs 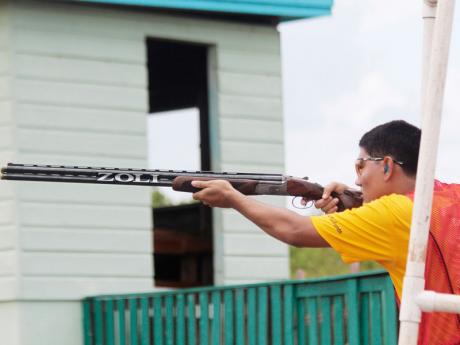 Nicholas Chen exploded with 94 out of 100 targets - which was the highest overall score on the day - to win the 17-19-year-old category at NCB Capital Markets Jamaica Skeet Club (JSC) Sporting Clay Junior Shotgun Tournament at the JSC range in Portmore on Sunday.

Chen, of Hillel Academy, was also the overall champion after taking the Super six (SS), this for competitors with the six best scores in all classes.

Chad Ziadie, who studies overseas at St George's School in New York, placed third in the SS with 20 out of 25 targets and an overall score of 107.

Chen stressed that visualisation training was key to his victory.

"It was a lot of pressure, but I managed to keep it together and shoot 94. The shoot-off was very challenging to me. However, I pulled through to win by one bird," he observed.

"I have been visualising from last week and it's a serious help to me; it was very nerve-wracking. Thankfully, I made it through and came out on top."

The youngster pointed out that he competed abroad (Seminole Cup in Florida) before and these targets are of international standards, "exactly like some of the birds we see abroad, the distance, the speed the angles".

Reid, an arch-rival of Chen, came into the super six with a score of 92 out of 100 targets and the Junior A winner. Hugh Jones copped second place in Junior boys A over Nicholai Clarke in a shoot-off. Both shot 88 out of 100 targets in the main event.

Kecia Pierre took the Beginners Girls category with 36 out of 50 targets. Sophia Asher took second in a shoot-off with Tayla Ziadie. Both were tied with 34 out of 50 targets in the main event.

Tomas Hudson took Beginners Boys Class with 44 of 50 targets, turning back the challenge of John Paul Asher 42/50 and Matthew Carroll 41/50.

Danzell Knight took Sub-Junior A with 84 of 100 targets, while Jacob Therrien (81) and D'Andre Simpson (80) placed second and third, respectively.

"I set the course harder and the boys stepped up to the plate. This is the best year of the four years (of the tournament). This year, we learnt more, as the standard of shooting by our juniors is getting up to international standards. They are really improving at an alarming rate. It's helping them at school, it's helping them with their focus and their discipline."

He also thanked title sponsor NCB Capital Markets, as well as the other sponsors, for "spending a lot of money" and "support from their staff to build sporting clay in the island".