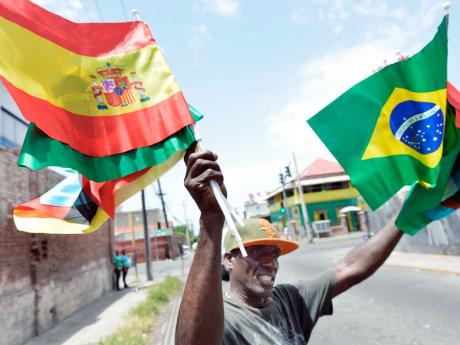 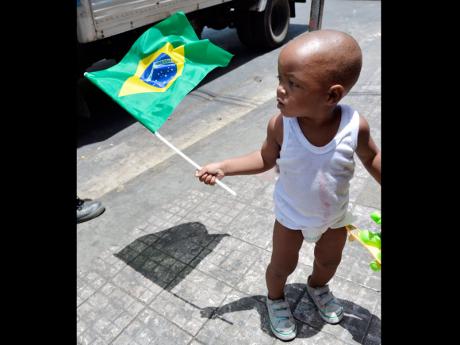 Our lead story on the kick-off of World Cup 2014 should have said the Brazilian city, Rio de Janerio, rather than capital.

The four-year wait is over as the 20th staging of the greatest footballing show on Earth gets under way today with a match between host Brazil and hopefuls Croatia.

In preparation for the 2014 World Cup, the Brazilian city, Rio De Janeiro, has become a blank canvas for graffiti and other colourful urban art forms that have transformed the streets, buildings and sprawling favelas of the South American country, with a population of 200 million, into a melting pot of colour and vibrancy.

Three thousand miles away, on the streets of Jamaica's capital, Kingston, Brazilian flags demarcate street corners, hang from shop fronts and waft rhythmically in the afternoon breeze from the hands of shoppers, sellers and public transport operators alike as they, too, get ready for the football fiesta.

The Gleaner visited areas in and around the capital on the eve of the start of the World Cup in search of the same energy that will illuminate Brazil over the 41 days the tournament will last.

"The vibes is nice enuh, yu understand? Coz a World Cup wi seh enuh (and) everybody has a vibe going on. (It's) well nice and flag a sell and tings like that," exclaimed 36-year-old Roderick Lewin as he sat on a chair in the middle of a bustling Orange Street in downtown, Kingston.

"The World Cup also gives a nice unity and makes people come together and kinda cut down certain violence and ting and people more have peace, talk and more interact with each other, so overall, it's a good vibe."

On nearby Beckford Street, 40-year-old Roger Reynolds explained that he expected the pending World Cup to have a positive impact on social cohesion.

"Well, football normally is the most unifying sport in the world enuh, so once football is playing, you know you're going to have a unifying spirit; bar and stuff will be full and all that, people living room, a lot of liquor and stuff."

Reynolds added that despite Jamaica's absence from the greatest footballing spectacle, people would adopt a surrogate side.

"The World Cup fever is on and everybody wants them side to win and stuff. Jamaica is not in it but all wen Jamaica not in, we still, you know, jumping around and supporting the team weh we love, which is Brazil and a few people saying Argentina, but the vibes are nice and is up."

After leaving downtown, Kingston, and journeying to the community of Waterhouse, The Gleaner was met by a colourful car wash, whose perimeter was lined with numerous international flags, signalling that this would be the community's adopted home for World Cup.

"We're going to be showing the matches for the community, so those who want to come and see the matches on big screen, they can come here, buy a few liquor, drink some soup, (eat) food, you know, (while) we play a little music. We're going to have a lot of events here. We're just going to welcome everybody out here at the chill-spot," said 21-year-old Dwayne Henry, who said his venue was a family-run operation.

Meanwhile, in Half-Way Tree, 12-year-old schoolboy Dante Thompson clutched a quickly melting bag juice that may have offered some momentary respite from the sweltering Kingston heat. His other hand grasped a Brazil flag as a personal exhibition of solidarity with the South American favourites.

"Everybody at school talk bout Brazil; me and mi friend name Andre, wi have one bet, Spain and Brazil which one gwine win!" he said excitedly.