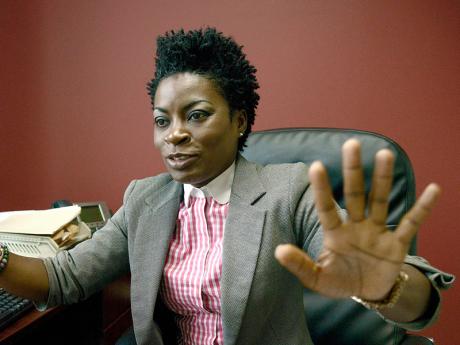 Marisa Benain, director of cultural policy and monitoring, ministry of youth, speaks on the Art for Life programme - Gladstone Taylor/Photographer

It has been a year since the inception of the Art For Life programme at the South Camp Correctional Facility, and the coordinators are elated many of the girls have been able to find methods of healing through the arts.

Prior to a trip Minister of Youth and Culture Lisa Hanna made to Fort Augusta and Horizon Remand centres just over a year ago, girls who were in conflict with the law and in State custody were housed at different locations. During the minister's visit at one of the institutions, the singing of two girls became the catalyst for the Art for Life programme.

"They had a little concert at Fort Augusta and we saw two girls who sang and harmonised very well even though they never had any training" said Marisa Benain, director of cultural policy and monitoring at the Ministry of Youth and Culture. Further enquiries, she said, revealed the girls were never engaged in any kind of activities that could be of benefit to them after they left the institution.

Subsequently, Benain conceptualised having an arts programme at the South Camp Correctional Centre.

"When I wrote the proposal, it was really supposed to happen at Homestead Place of Safety, Fort Augusta and Horizon Remand Centre. Luckily, we now have one facility to hold all the girls at South Camp," she said.

Benain further highlighted a number of positives that have been derived from the programme since its inception.

"It keeps them occupied and motivated, and I hope that when they leave, it can actually form some kind of foundation to build upon. Often, they are filled with negative emotions that can be severe. The programme eases some of the tension and stress that they would have built up inside," she said.

"There were programmes such as mathematics and English before, but this is something different that they never experienced. It helps them to express their feelings in a different manner," Benain continued.

She also stated how excited the girls were to have such a programme.

"When a teacher is absent, it is war; they will say how the teacher never come class and complain because they want to have it. I get a lot of joy from that because I know they want it, as I know from personal experience what the arts can do," Benain said.

"It's not the perfect setting and the girls have different issues but generally, Art For Life is making them feel, better" she continued.

Since the programme started there has been an average of 50 girls taking part at any point, as some of the girls will leave the correctional centre to return home at various points.

"We hope to expand the programme an tweak it a little bit as the music, dancing and the art has been really great, we are even working towards starting a band. My dream is for at least one of them to end up at the Edna Manley College for the Performing Arts," Benain said.

"Art For Life also recently got some funding from UNICEF and now the CDA (Child Development Agency) wants to replicate Art For Life at Homestead Place of Safety and another home in Trelawny which means the programme is heading in the right direction," she continued.