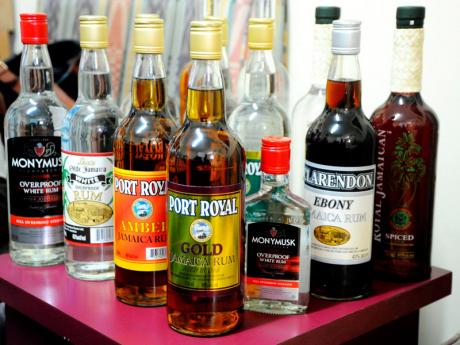 Some of the rums bottled at the KRB Lea rum factory as seen February 2014. - File

Rum is a centuries-old busi-ness in Jamaica - and one producer has been around to see most of that history and to see the demise of its competitors.

J. Wray & Nephew Limited, owner of the Appleton and Wray & Nephew brands, is the oldest and by far the largest producer of rum for the Jamaican market.

The company can trace its rum-producing roots back to Appleton Estate in 1749. That makes it the world's second-oldest rum producer, after Barbados' Mount Gay distilleries (1703) and ahead of Martinique's St James rum (1765).

The Jamaican producer's two leading brands are J. Wray & Nephew White Overproof and Appleton. But the company has many more rum brands on the Jamaican market, including Edwin Charley, Coruba, its local version of the Captain Morgan brand, Rum Finzis, Conquering Lion, JBW Estate and Cocomania.

While outliving many other Jamaican brands, the company even outlived some of its own brands - including the previously well-known One Dagger, Two Dagger and Three Dagger rums which went out in the 1950s, and more recently C.J. Wray Dry Rum, which had its heyday after its launch in the early 1990s.

But there has been a resurgence of new Jamaican rum brands, unattached to the Appleton behemoth, in recent years, as newcomers try to chip or sip away at Wray's predominance, which is cemented around 70 per cent market share.

The other producers are fighting for position in both the local and export markets. Four of the largest other brands include Rum-Bar, Monymusk, Port Royal and Rum Fire. Others include Blackwell, Lion Pride, Smatt's and Royal Jamaica.

Of all the other brands, "Rum-Bar has made some gains," and comes in second place, Lloyd Forbes, director of the Spirits Pool Association, told the Financial Gleaner.

Rum-Bar, which has been on the market since 2007, is owned by Worthy Park Estates and produces a white overproof rum, a rum cream and two vodkas under the Rum-Bar name, as well as a selection of aged rums under the Worthy Gold brand.

"We have been doubling our sales annually," said National Rums' general manager, Earl Patrick, of the Monymusk brand.

On the market since November 2011, Monymusk has products for each of the segments now controlled by J. Wray & Nephew and its Appleton brand, including white, gold and aged. In December, it introduced its Special Reserve product to compete in the premium-aged segment.

National Rums exports 98 per cent of its output as bulk rum, Patrick said. One of its largest customers is Diageo, producer of the international (as opposed to the local) Captain Morgan brand - leaving only two per cent for its own brand and the local market.

National Rum's strategic objective is to move towards a 50/50 split long term, with an increase in sales both locally and internationally, Patrick said.

In an effort to win over Jamaica's diehard Appleton drinkers, Monymusk has a price point that is "just a touch under Appleton," Patrick said.

"We've got to give them more than one reason to switch," he said.

Port Royal and other rums fall a "far distance" behind, Forbes told the Financial Gleaner.

Rum Fire as its closest competitor. KRB Lea does not have its own estate, and like many of the other smaller brands sources its rum from one of the big distilleries - in this case National Rums.

The company gets its gold rum from the NRJ distillery at Long Pond in Trelawny and its white rum from NRJ's Monymusk distillery.

KRB Lea used to produce rum under its own name in the 1990s, Messado said, but changed to the Port Royal brand in 2007.

While the majority of its market is in Jamaica, KRB Lea exported 1,200 cases to Korea last year, and will start exporting to Russia later this year.

Other rums on the Jamaican market include Red Stripe's D&G overproof rum and Gold Label. Red Stripe is owned by Diageo, which is one of the world's leading rum producers. For legal reasons, the company can't sell its leading Captain Morgan brand in Jamaica. Despite that, it still has a small segment of the local rum market via its Red Stripe rum brands, as well as Myers and its Ron Zacapa from Guatemala,

Another independent brand is Lion Pride overproof. The brand is better known for its condoms and rolling papers, but Lion Pride rum has a market in rural areas such as Linstead and Ewarton in St Catherine.

Some smaller brands have been getting international recognition. One of the most recent winners is Chris Blackwell's Blackwell Rum, which won a silver award on April 8 at the Rhumfest competition in Paris, France.

Blackwell is better known for his promotion of music stars such as Bob Marley, U2 and Millie Small, as well as Island Outpost which has several upscale hotel properties in the Caribbean, such as Strawberry Hill in St Andrew and Goldeneye near Oracabessa in St Mary.

Another award winner is Hampden Estate's Rum Fire which won a gold medal for its white overproof rum at the 2012 International Wine and Spirit Competition (IWSC), among other medals.

Smatt's Rum won a bronze medal at the IWSC for its gold rum in 2011.

Some rums, though Jamaican, are hardly found on the local market. Instead, their owners concentrate on high-end niches in the export market.

The Smatt's rum brand is five years old and is mainly produced for export to the European market.

"The Jamaican market is important as that's the home market ... as this is the ideal place to spread our brand around the world into new markets. Our largest market is Europe," said owner Ashley Smatt.

The rum is in the super premium segment with a price point of US$50 per bottle.

Smatt says the brand is "growing rapidly" and is moving into new markets in Australia, New Zealand, South Africa and Brazil, USA, Canada, Italy, Spain and Hong Kong "to name but a few".

Royal Jamaican Rum is another brand produced mainly for export - but to the US and Canadian markets, rather than Europe. The four-year-old company had total sales of 15,000 cases of its various products in 2013.

Sales may be low, but they are "growing at 100 per cent a year," according to Rick Anand, owner of Royal Jamaican Rum.

Anand, who is based in Calgary in Canada and comes to Jamaica about six times per year, says he concentrates on having "extremely high" quality with "attractive packaging".

One reason Royal Jamaican concentrates on the export market is the difficulty it has faced to enter the local one. "It's hard to penetrate the local mindset," Anand said.

"We are trying to create a brand with longevity - and then penetrate the Jamaican market," he said.

The company's "number-one seller" is its newly introduced spiced red and white rums, which hit the market late last year, he said.

Export markets currently include the US, Canada, Australia and Sweden.

"We are going into the UK very shortly," said Anand.

Locally, the company has had some sales in gift shops on the north coast and in duty-free shops.

Other recent indepen-dent brands have come and gone.

Street Vybz Rum hit the market in 2008. Bottled by KRB Lea Rums in Kingston, production was stopped in 2011 because of a disagreement between owner Vybz Kartel and investor Corey Todd.

Next on the scene was Yaad Swag, a rum brand Todd created using artistes such as Beenie Man, Khago and Aidonia to market the product. But that brand died too, when Kartel and Todd patched up their partnership and resurrected the Street Vybz brand in 2012.

Since then, Street Vybz has faded away once more.

With all these local brands, there is still room for some imported rums can also be seen on some supermarket shelves. Brands include Angostura from Trinidad; El Dorado from Guyana; Havana Club from Cuba; Barbancourt from Haiti; and Ron Zacapa from Guatemala.

But the imported segment is "insignificant" Forbes said - and is normally a "tit for tat" situation, with Jamaica selling just as much of its rum in the Trinidadian and Guyanese markets.