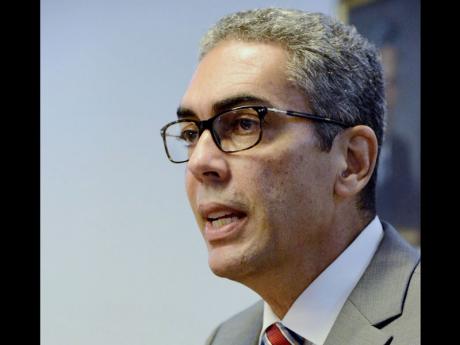 The 0.2 per cent shortfall in tax revenues for April, the first month of the current fiscal year, was "not so bad" given that non-tax revenue more than made up for the shortfall, co-chairman of the Economic Programme Oversight Committee (EPOC), Richard Byles, said on Tuesday.

While noting the importance of tax revenues for the primary balance of central government, he said the performance was mixed. Collections totalled $22.7 billion, marginally below the budget of $22.8 billion.

For the period, there was a primary deficit of $1.3 billion, but that bettered the Government's budgeted deficit figure of $1.7 billion. For June, the first quarterly occasion that the International Monetary Fund examines the primary balance, it needs to be $17.1 billion.

"So between now and June, we have to go from -$1.3 billion to $17.1 billion and a lot of that happens in June itself when quarterly corporate taxes get paid," Byles said as he released the 13th communiqué of the non-public-sector members of the EPOC at a media briefing at Sagicor Group headquarters in New Kingston.

The net international reserves at May stood at US$1.16 billion, above the June target of US$1.15 billion.

"So I don't expect to see a lot of problems with the net international reserves. The challenge is, as always, mostly on the primary balance," Byles said.

The fiscal balance, that is, the primary balance plus debt payments, was -$9.2 billion, better than the budgeted -$9.5 billion.