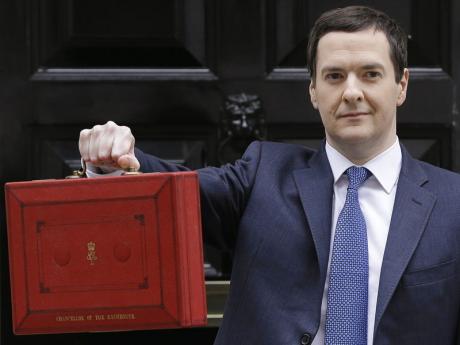 In this file photo dated Wednesday, March 19, 2014, Britain's Chancellor George Osborne poses with the traditional red dispatch box outside his official residence at 11 Downing Street in London, as he departs to deliver his annual budget speech to the House of Commons. - FILE

In an effort to protect the integrity of London as a financial hub, Britain's Treasury chief is set to propose on Thursday new criminal sanctions covering foreign-exchange trading, the latest global market to be hit by scandal.

George Osborne will use his annual speech on the state of the economy to promise tougher oversight of global financial markets that are based in the British capital and have been allegedly manipulated by banks. These markets cover global currency values, interest rates that affect mortgages and credit-card rates around the world and the price of commodities like gold.

"I am going to deal with abuses, tackle the unacceptable behaviour of the few and ensure that markets are fair for the many who depend on them," Osborne will say, according to prepared remarks.

The most recent of the scandals in these markets is over the alleged manipulation of foreign-exchange markets. Regulators in Europe and the US are investigating a number of banks, and Citigroup and Barclays are among the institutions that have suspended traders.

The government said a joint review by the Treasury, the Bank of England and the Financial Conduct Authority will examine the way the markets - both regulated and unregulated - operate. The review will focus on areas where concerns about misconduct have arisen: fixed-income, currency and commodity markets.

But the Treasury department also warned that the review's recom-mendations could be made appli-cable across a wider range of wholesale markets.

The scandal over alleged foreign-exchange manipulation could be even more serious that the one surrounding the rigging of the London interbank offered rate, or Libor - a key rate underpinning transactions the world over. That investigation resulted in billions in fines for the banks implicated.

The currency-trading investigation could have broader shock waves, as it goes to the integrity of the markets rather than just a single rate.

The Financial Conduct Authority, which regulates the sector, launched its investigation last year and said it was examining a number of firms. But it is investigating institutions under principles governing institu-tional integrity and systems, rather than specific rules.