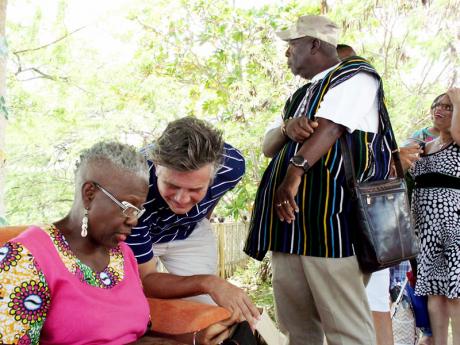 Professor Carolyn Cooper (seated) signs up persons for one of the open-mic sessions at the 2014 Calabash International Literary Festival, held at Jake’s in Treasure Beach, St Elizabeth, at the end of May. 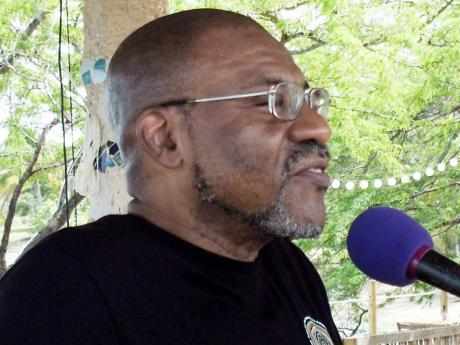 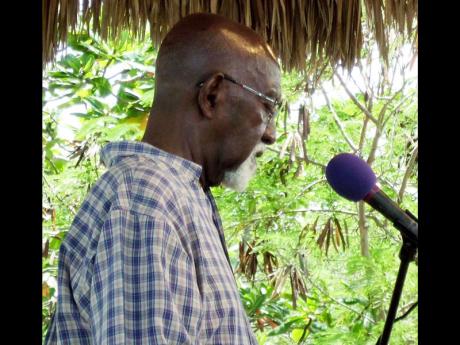 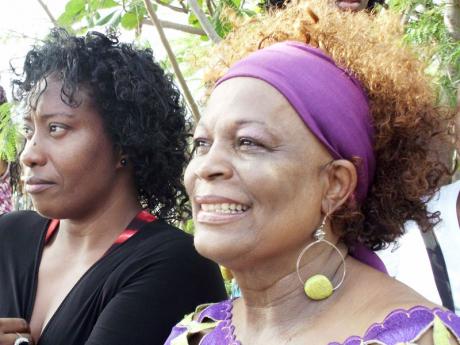 Judy Mowatt (right) and Dawn Martin at the 2014 Calabash International Literary Festival, held at Jake's in Treasure Beach, St Elizabeth, over the last weekend in May.
1
2
3
4

Author Salman Rushdie, who had an Islamic 'fatwah' (death sentence) proclaimed against him in 1989 for his allegedly blasphemous novel, The Satanic Verses, was clearly delighted with the recent Calabash International Literary Festival in Treasure Beach, St Elizabeth.

While being interviewed on the afternoon of May 31, the internationally acclaimed and controversial writer enthusiastically told the audience under the huge white tent erected close to the Caribbean Sea that there is no other literary festival like Calabash in the world.

"He meant it, I am sure, as a compliment," festival co-founder Kwame Dawes subsequently e-mailed me.

One of the things that makes Calabash unique is its strong performance component, even though, in Dawes' words, it "insists on being a literary festival and being about books." Over the years since Calabash was launched in 2001 as an annual festival (it is now biennial), that component has taken many forms.

There has been drama. Dawes was heavily involved in theatre as a producer, director, playwright and actor while he lived in Jamaica. In the early days of Calabash, he staged one of his plays at Jake's, the Treasure Beach venue. And the late Trevor Rhone introduced his autobiographical play Bellas Gate Boy to Calabash audiences with a reading.

There have been live bands with singers. Some have been showcased in The Midnight Ravers segment from midnight to 2 a.m. Singers include Freddie McGregor and Etana in 2010, while Ernie Smith had a lunch hour concert in 2004.

The most popular live-music session, however, has become the Sunday afternoon 90-minute closing of the festival. Led by Wayne Armond, the Calabash Acoustic Ensemble (as the group of musicians is now called) celebrates individual Jamaican musical icons each year. Bob Marley and Peter Tosh have been so honoured. This year, the focus was on Judy Mowatt.

Two of her former back-up singers, Sharon Tucker and Dawn Martin, sang many of her hits - including Silent River, I'm Alone, Oh Jah, Warrior Queen and Many Are Called - before Mowatt herself took the stage to close off with a highly appreciated set.

There is also a performance element, through the oral tribute paid to Caribbean writers through annual readings of selected novels by panels of readers. This year, the 50th anniversary of Heartland by Guyanese author Sir Wilson Harris was celebrated.

I asked one of the four readers, broadcaster and attorney-at-law Dionne Jackson Miller, to comment on the readings as a performing arts aspect of Calabash. She pointed out that many people get exposed to writers they've never read. The readings, she added, "ease them gently into the experience".

She also opined that with the sea and sky as a backdrop and the wind providing sound effects, the environment is very theatrical. Later, alluding to another benefit of the readings, Jackson Miller told the audience that her "bucket list" included wishing for an invitation from Dawes to read from her book at Calabash.

"The problem is," she said, smiling, "the book is not written yet. So the invitation would motivate me to write it."

Another reader, Douglas Orane, former CEO and chairman of GraceKennedy Ltd, told me he was "bowled over" when asked to read. Rehearsal for his 'performance' included recording his section of the book and listening to it. He also read segments to other people and got feedback.

And he tossed me this gem: "The key to excellence is not genius, it's preparation."

Lastly, there are the festival's poetry 'readings'. In Jamaica nowadays, many - perhaps most - poetry readings are really poetry performances. Many times it is that uniquely Jamaican form of performance poetry - that is, poetry written to be performed - called dub poetry.

It was birthed in the 1970s by two widely separated Jamaican poets writing independently - Linton Kwesi Johnson in England and Oku Onuora in Jamaica. Both were influenced by Jamaican DJs like Big Youth, I-Roy, U-Roy and Dillinger. (For more on this coincidence, see Mervyn Morris' 1999 book Is English We Speaking And Other Essays.)

A poetry performance was Friday night's Slammin' segment, described by the organisers as "four voices forged in a hip-hop foundry and featuring American hip-hop poets".

One of the most popular components of Calabash is the open-mic sessions. Anyone can read anything, if they can get through the crush to sign up with coordinator Prof Carolyn Cooper. There were three open-mic segments this year, lasting five hours in all - an hour longer than usual, according to my records.

The event offers both prose and poetry and those presenting the former generally just read, maybe to promote a recently published book. Not surprisingly the poets, especially the performance poets, are the crowd favourites.

A particularly poignant moment came with the appearance on the stage of bona fide performance poet Neto Meeks. Still shaky from a health incident, he nevertheless emoted with strength.

Prof Cooper sees the open-mic segment as "an essential component of the festival". She said: "It gives so many people the opportunity, within a short space of time (three minutes each), to show what they can do, and the audience appreciates it. I think it is an incubator for nurturing talents. Calabash wouldn't be the same without the open mic."

On the general topic of performance at Calabash, Dawes said that the presenting writers come to discover that "they're engaged in an oral discussion with an audience that understands what listening is all about."

That understanding, he said, is ingrained in Jamaicans. "We've been trained as radio people in Jamaica for years, and it's still a radio country," Dawes said.