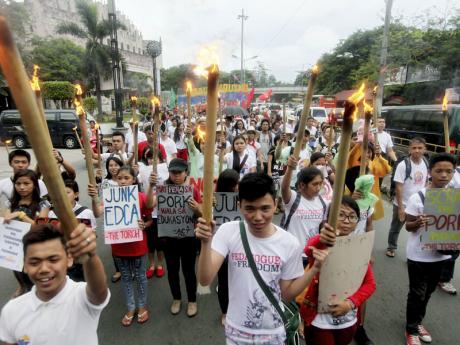 Carrying lighted torches, hundreds of activists march towards the Presidential Palace in Manila to demand that Philippine president, Benigno Aquino III, prosecute all officials, including some of his allies, who were allegedly involved in stealing from state funds intended for projects to help the poor. AP

Hundreds of activists demanded yesterday that Philippine President, Benigno Aquino III, prosecute all officials, including some of his own allies, who allegedly stole from state funds intended to help the poor.

Carrying kerosene torches, the protesters marched to the presidential palace but were stopped by riot police who barricaded the road.

Three senators and several associates have been charged with plunder for allegedly receiving hundreds of millions of pesos (millions of dollars) in kickbacks from a businesswoman who skimmed the money from government allocations for the poor.

The protesters say all three senators belong to the opposition, and that any Aquino allies linked to the scam should also be charged.

"It is not enough for them to charge the three because they are all opponents of the president, they belong to the opposition," said former left-wing Congressman Teddy Casino. "What we want is to hold everyone involved accountable."

"We are here to express our outrage over the current system, over the way government is being run, over the lack of political will in prosecuting the many plunderers who have emptied government coffers, who have stolen from the people," he said.