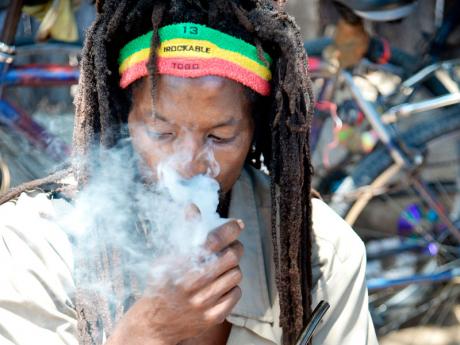 Igel, take a puff from a ganja pipe at the Trench Town Culture Yard, after a march through the Corporate area in support of the legalisation of marijuana recently. - File

AS JAMAICA seeks to follow several countries and a number of American states that have legalised the possession of small amounts of ganja, the country's justice minister, Senator Mark Golding, says he does not anticipate any backlash from international partners.

That's because, as Golding sought to explain during a Jamaica House press conference yesterday, the Portia Simpson Miller administration has no plans to change the law relating to the cultivation, dealing in and exporting of ganja.

"What we are simply doing is modifying the penalty regime to make it more suitable for our reality in Jamaica and less oppressive of our people," Golding reasoned.

"Do I anticipate any [fallout with international partners]? I don't think so, in light of international trends," he said, pointing out that the changes are in line with the positions adopted by 20 countries and at least 20 American states.

The justice minister was seeking to defend the move by his administration to make long-anticipated changes to the Dangerous Drugs Act and the Criminal Records (Rehabilitation of Offenders) Act, both of which have already been approved by Cabinet.

Under the proposed changes to the Dangerous Drug Act, persons found in possession of up to two ounces of marijuana for personal use will no longer be arrested. Instead, they will be issued a ticket that will attract a "monetary penalty", to be paid outside the court system and which will not result in a criminal record.

"Failure to pay the ticket within a specified time [30 days] will be a minor offence punishable in the Petty Sessions Court by an order for community service," Golding said.

Under the proposed changes to the Criminal Record Act, thousands of Jamaicans could end up with a clean police record.

Golding explained that the proposed amendments would allow persons found guilty of possessing small quantities of marijuana and smoking marijuana to have their records expunged through an application to the Criminal Records Board without having to wait out the expungement periods set by the courts.

"There is no limit. We will go as far back as possible," Golding said. He acknowledged that such criminal records have barred offenders from getting certain jobs, obtaining visas, and "generally, limit" their life prospects.

The amendments are contained in a bill the minister said he expects will be tabled in Parliament before the summer break.

Golding said he was hopeful that the amendments to the Dangerous Drug Act would be tabled in Parliament before year end and warned that until then, Jamaicans were "obliged to abide by the rule of law as it stands today".