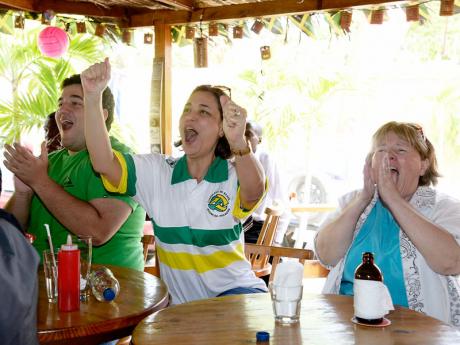 An own goal by Marcelo in the 11th minute threatened to dampen the mood at Jo Jo's Jerk Pit on Waterloo Road in St Andrew yesterday afternoon as members of the Brazilian embassy gathered to support their homeland.

Ramos wore a white, green and gold Brazilian football shirt and sat attentively with a quiet confidence surrounded by friends as Neymar equalised for Brazil in the 29th minute.

Rissole, a traditional Brazilian appetizer, was then passed around on a stainless steel platter among those in attendance as a preemptive celebration. These crisp-fried golden, semi-circular treats, filled with either chicken or callaloo, whetted the appetite in anticipation of the second 45 minutes of entertainment that was to come.

Moments later, Brazil was awarded a penalty, and as Neymar stepped up to put the hosts in the lead for the first time, a row of fists clenched in anticipation. As the Croatian goalkeeper, Stipe Pletikosa, deflected what initially looked like a good save into the back of the net, Jo Jo's patrons began to chant "Samba! Samba!" in recognition of the pending win.

The gathering of about 30 spectators, including Jamaicans, some of whom were attired in formal work clothes, let out a collective sigh of relief as a Croatian goal, which threatened to equalise the score line in the late stages of the game, was hastily disallowed by Japanese referee Yuichi Nishimura.

A strong breeze that continuously blew through the venue kept the Brazilian flags and a range of replica football jerseys afloat from their neat positions around the walls of the venue, and as a third goal was scored by Oscar in the dying moments of the game, the bar-side celebrations reached fever pitch.

See related stories in the B Section.