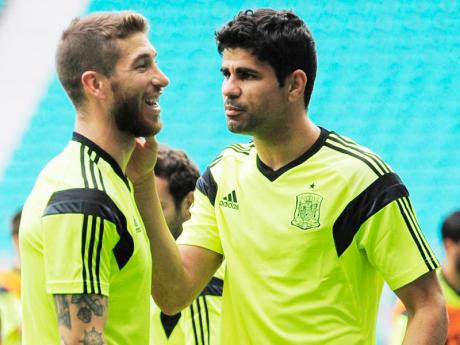 Spain's team is creeping up in age and its core of Barcelona players are coming off a forgettable season.

Yet coach Vicente del Bosque expects his defending champions to hit form quickly against the Netherlands in the World Cup today.

The rematch of the 2010 final, won by Spain 1-0, provides Group 'B' with a riveting opener that could have an impact on each team's chances in Brazil.

"This is a mature team with players in their prime. They aren't here for what they have achieved, but what they will achieve," Spain coach Vicente del Bosque said yesterday from the Arena Fonte Nova.

Spain are the tournament's most experienced squad, which means key players such as Iker Casillas, Xavi Hernandez, and Xabi Alonso could be playing in their final major championship.

Brazilian-born striker Diego Costa is expected to start up front for a Spain team that will look all too familiar to those who have watched it defend its European Championship trophy in 2012 after its maiden World Cup win in South Africa.

So apart from the physical presence of Costa in attack, Spain should create most of its chances against a defensive Dutch team from a midfield that is expected to include David Silva, Cesc Fabregas and Sergio Busquets.

Meanwhile, if there is one player Spain are wary of before their World Cup opener, it is Netherlands forward Arjen Robben.

Today's Group 'B' game not only offers a rematch of the 2010 final won by Spain, but a chance of redemption for the Dutch winger.

Robben was put clean through to face Iker Casillas at Soccer City, but saw his effort deflected wide by the Spain goalkeeper in the final's best scoring opportunity until Andres Iniesta netted the extra-time winner.

Spain defender Javi Martinez said that moment has stayed with his Bayern Munich teammate, so the defending champions will be keeping a close eye on Robben in Salvador.

"Robben shakes his defender so well to find space, so we're going to have keep tabs on him," Martinez said on Wednesday.

While Martinez also pointed to Robin van Persie and Wesley Sneijder's ability to decide games, Spain know that it's Robben who is the most eager to make up for his famous miss.