World Cup off in style 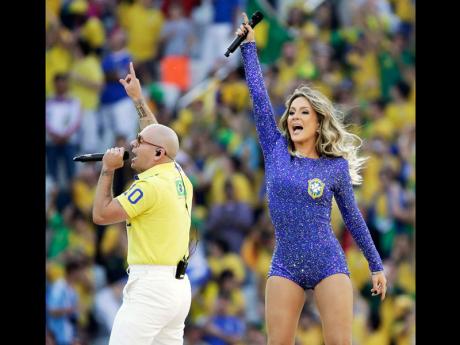 Rapper Pitbull (left) and Brazilian singer Claudia Leitte perform during the opening ceremony for the 2014 World Cup in Brazil. - AP

Itaquerao Stadium shone under blue skies as Brazil kicked off its home World Cup with a football-style carnival yesterday before thousands of dancing yellow-clad fans, who seemed eager to put construction delays and protests behind them.

Jennifer Lopez, rapper Pitbull and pop star Claudia Leitte bounced around a giant stage resembling a peeled melon singing the World Cup theme song, We Are One, as Brazilian band Olodum banged drums below on this nation's Valentine's Day.

JLo, dressed in a low-cut sparkling green outfit, turned up for the performance despite earlier reports that she wouldn't be able to attend.

Brazil is ready to samba, and plans to teach the world to join in for the coming month during the showcase tournament for the world's most popular sport.

At one point at the end of the ceremony, fans chanted and booed against Brazilian President Dilma Rousseff and soccer's governing body, FIFA. Many in the nation have complained that spending on the World Cup and the 2016 Rio Olympics has diverted cash from the poor and infrastructure improvements.