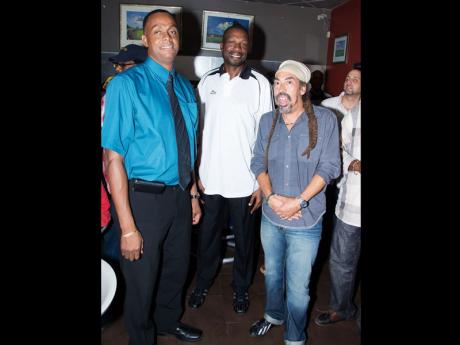 The event packed star power as celebrities from sport and entertainment celebrated the restaurant's milestone with its owner, Ambassador Courtney Walsh.

Hosted by sports journalist Patrick Anderson, the evening highlighted achievements of the popular hot spot over the last 10 years.

In his brief speech, the man of the moment said, having seen the development over the last decade, he is positive that the restaurant could survive the harsh economic times for another 10 years.

"Tonight, I am overcome by a great sense of pride and achievement to see how far we have come. From the idea of opening a little bar to what we see now, I am very happy," said Walsh.

He also announced that, as part of its10-year anniversary celebrations, Cuddy'z will be hosting a special event every Sunday, until August, starting tomorrow.

Walsh revealed that as part of the entertainment package, there will be artistes, 'musical friends of Cuddy'z', who will be passing through each week, leading up to the main event this summer.

"The main event will be on August 23. We will be having a road block in the area. It will be a massive celebration, so just mark the date and come out and let your hair down," he said.

It is expected that different sound systems will be booked for the August show.

Walsh also told the gathering that Cuddy'z will be the place to be, over the next month, as FIFA World Cup action continues in Brazil.

"Cuddy'z has always been a place to watch different sporting events. It has the perfect atmosphere for the games, and the next couple of weeks will be no different. We have a lot in store so just come out and enjoy," said Walsh.

Members of the restaurant staff were also honoured during the brief ceremony, among them were Catherine Carr and Janet Foster who have been on staff since its inception.