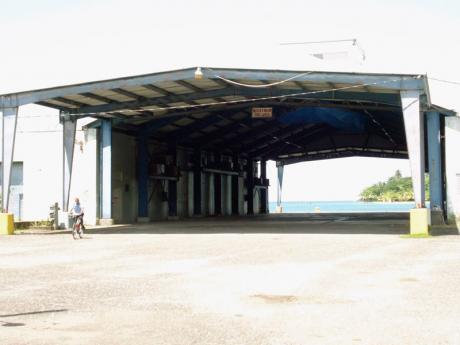 PORT ANTONIO, Portland:ONCE THE pride of not only Portland, but also of Jamaica during the banana-export trade, which generated massive employment for locals, the Boundbrook Wharf now sits idle, with its terminal building rapidly decaying.

The wharf, which enjoyed the glory days of the 1970s, '80s, and 1990s, buzzed with activities as banana, commonly known as 'green gold', was loaded on to ships destined for Europe, where the locally grown agricultural produce was largely consumed by foreigners.

Since the decline of banana production and its industry, which was triggered by devastation caused by back-to-back hurricanes, the unemployment level has risen in the Port Antonio area, with hundreds of persons directly and indirectly connected to the banana trade losing their livelihood.

"It is a shame and disgrace to see such an upscale facility going to waste," said Aston Bailey, retired civil servant and a resident in the parish capital of Port Antonio.

Bailey added: "Boundbrook Wharf reflects the extent to which the economy in Port Antonio, and, to a larger extent, the parish, has declined. It used to be a booming and bustling port where banana was exported at least three days per week. In those days, banana was king, and our agriculture was doing well in Europe. Boundbrook wharf also served as a cruise-ship dock before the construction of the Ken Wright shipping pier."

Activities on the wharf were scaled down in 2003.

The facility is located in the community of Boundbrook in Port Antonio adjacent to Navy Island, which is home to former Hollywood legend, Errol Flynn.

Approximately 10 years ago, dozens of 40-foot cold-storage containers, which were used to store bananas selected for export, were removed from the wharf and taken elsewhere. The move signalled the end of an era when banana export was arguably the chief income earner for many Portlanders who were employed in large numbers at the facility.

In those days, the fleet of Jamaica Producers ships called at the Boundbrook Wharf three times per week and sailed out with loads of fresh green bananas.

Today, the wharf remains bare on the seafront of Port Antonio, just across from the marina and boatyard, with only a flock of pigeons occupying its ceiling, bordered by rusting perimeter fencing.