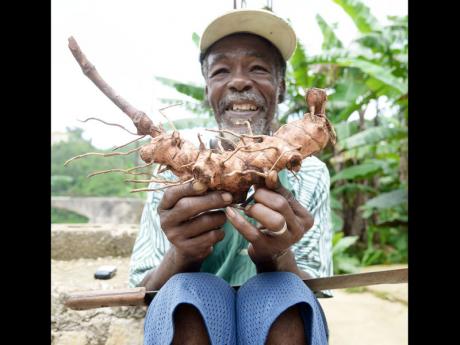 With an abundance of high-priced commercial energy drinks and sex tonics on the market, one Manchester farmer is advocating the use of a local tuber as a much more cost effective remedy to address tiredness and enhance sexual performance.

When Rural Xpress caught up with Oralto Clarke in Walderston recently, he had pieces of a tuber called Bryal, which he claims can surpass anything on the market in terms of the energy drive it provides.

"The type of energy it gives you is lasting. You going to have energy all the time to keep working. You feel nothing like tiredness," he disclosed.

The 54-year-old, who admits to using Bryal for more than 30 years, says it was his father who passed on the secret of the tuber, which, he says, grows in much the same way as yam. Clarke claims it was planted by slaves, who guarded the secret of its effectiveness, knowledge which they passed on to a select few. In time, he began to take an interest and did some research into this wonder drink. He can attest to its effectiveness.

"It work wonders fi me. You just chop it up fine and wash it and you can just boil it for 15 minutes in the morning. You don't have to sweeten it because it already sweeten, and you just drink it and it give you fulfilment. You nuh have nuh problem with sex, anytime, anywhere, but me would advise people to be more committed to one partner and use that energy fi work instead of just use it fi sex," he said.

The Bryal drink also has the effect of staving off hunger, according to Clarke, who makes his living through farming, burning coal, and selling Bryal. As with most crops, careful attention must be paid to the cultivation and harvesting process in order to get the maximum yield and benefit from this tuber.

After digging, it begins to 'spring' again in two to three months but is best left to grow for a minimum of three years in order to maximise the potency.

Clarke, who went on to demonstrate his agility with a number of acrobatic moves, attributed his flexibility and physical fitness to longer use of Bryal, which he plans to continue using to provide the energy necessary to maintain his hard-working lifestyle.