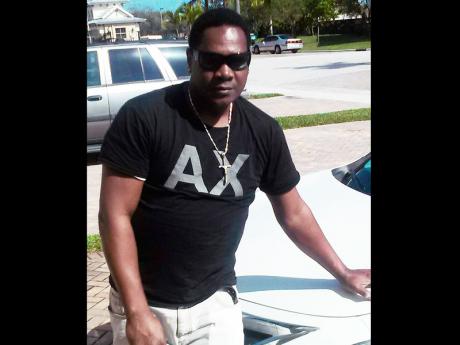 Benton McNeil, aka Mission-ARY, during a visit to Port Antonio earlier this week.-photo by Gareth Davis

Port Antonio, Portland:From the days of jumping across drains and wading in muddy waters during heavy rainfall while attending the Port Antonio Primary School in Portland, Benton McNeil, from all indications, is making a name for himself in the United States (US) through reggae music.

McNeil, who now goes by the stage name Mission-ARY, is on a mission to showcase his talent in reggae music across the globe, especially in Europe, Africa, and Asia.

A former student of Titchfield High School, McNeil, who has been involved in reggae music since he was 15 years old, when he won first place in several talent competitions between 1985 and 1988, is aiming for the top like one of his musical influences - Bob Marley.

"Music is a message in song," commented McNeil.

He added: "My mission is to bring reggae music to a higher level in just about every continent. I have already received blessings from international artiste, Shaggy, who has encouraged me to stay focused and never to give up. Shaggy is a positive influence, and my mission, and expected success, is to provide assistance to the needy, especially in the area of providing them with quality health care. One of my aims as a Portlander is to see how best I can provide assistance to the Port Antonio Hospital, which caters to hundreds of patients weekly. Jamaica is dear to my heart, and I am committed to helping with the development of the place of my birth."

After migrating to the US in 2008, McNeil has been doing even more music, which has gained him positive feedback from fans home and away.

And with several hit songs, including Low Pan Cash, Nukki Nukki, and Fool Too Long, which are being rotated in the US, Africa, Asia, and Europe, and with frequent airplay on Blackan Radio (Japan), Frenz FM (Florida), Rhythmic Radio (New Orleans), Stingdem Radio (Birmingham, UK), and Stylz FM (Jamaica), McNeil's rise to the top is considered by his fans on social media, including Facebook and Twitter, to be imminent.

McNeil, who visited his hometown in Portland earlier this week, told Rural Xpress that he is currently working on a compact disc that will include a number of tracks, to be followed by a music video.

Continuing, McNeil said: "My songs speak to real-life experience, and, in some cases, encourage the youth to study and make good their educational opportunities. My task is to simply educate and encourage the youth to strive for excellence irrespective of their social upbringing. My music is for the young and old at heart, with a little humour here and there. Reggae music and sports are arguably Jamaica's two most powerful and marketable assets, with the former losing its way. It is my intention to ensure that this rich music will be revived and remain for our lifetime."