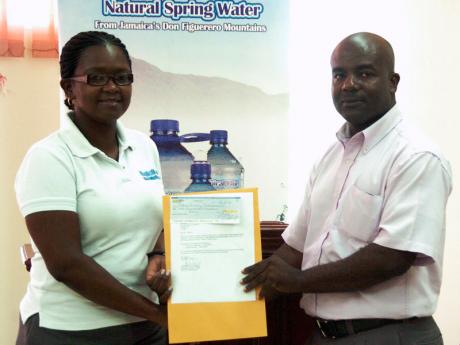 WESTERN BUREAU:St Elizabeth bottled water company, Tropical Blue, added their name to the list of sponsors for the sixth staging of the Jamaica Public Service (JPS) Western Primary Schools Athletics Championships, which is set to get underway today at the Montego Bay Sports Complex.

These are Montego Bay-based schools: Hosanna Prep, Hemmingay, St Mary's Prep and St John's Prep from St Ann, with the possible inclusion of Hydel Prep from Ferry, St Catherine, as part of a quintet of teams down to take part in the 4x100m and 100m invitational races.

"We are pleased to have on board Tropical Blue as our exclusive hydration sponsor," Ferguson said.

"Their sponsorship comes at a very important time for us because now we will have the precious commodity we know as water to hydrate and rehydrate our athletes," he added.

Scott-Archibald hailed the linkage with Tropical Blue and noted the importance of assisting, telling The Gleaner the opportunity could not be missed.

"Tropical Blue is very strong this side of the island, so when we look at what the championships mean to the children and their schools, we thought it was a good opportunity for us. We are looking for this to be a long and beneficial partnership," she said.

Meanwhile, Ferguson said everything is now in place for a successful staging, with defending champions Howard Cooke looking to join Wakefield Primary as two-time winners.

More than 1,000 students from 21 primary schools from across the western region and from St Ann are expected to grace the track.

The most thrilling races could come in the Class Three boys' events over 100m and 200m, where Enfield Primary's Omar Locke, last year's overall champion boy, will clash with Howard Cooke's Lanceford Cunningham over 200m.

Wakefield, back-to-back winners in 2011 and 2012, will have Akeem Dennis and Leighton Whittingham as their best prospects for a medal in the sprints.