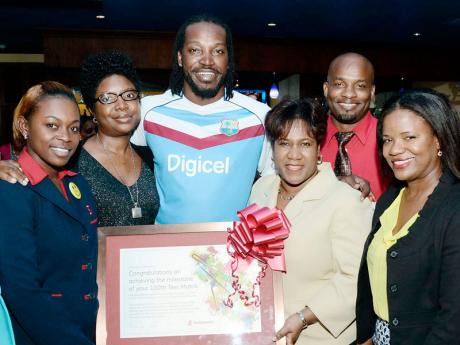 The community of Edgewater is still in a celebratory mood after its Under-13 football team won its second title of the season - the St Catherine Football Association Champion of Champions trophy - after they defeated Central St Catherine winners Royal Lakes 3-0 in a one-off match. Khori Robinson, Rojeaux Baines, and Anderson scored for the Peter 'Uncle' Beckford team.

"We are thankful for our second trophy of the season," Beckford said. "The players are dedicated and disciplined to training and it paid off for us. All except one player resides in Portmore, and that has enabled us to gel. Some players are now looking towards representing the (St Catherine) parish team."

Multiple champions Caribbean Classic will look to make another final in their successful career as they take on Spring Village in one of two semi-finals in the Portmore Domino Council Association's Wray & Nephew White Overproof Rum Portmore Domino League at Caymanas Track Limited tomorrow.

In the other semi-final, giant killers, Right Stuff, take on mid-season finalists Cookies International. Right Stuff knocked off top-seed Fort International in the quarter-final and any team playing them will have a difficult time. Both games are scheduled to commence at 11:30 a.m.

Edgewater FC made it three wins in a row when they blanked Rodwood 3-0 in the Colin Fagan-sponsored Portmore Under-15 football league last Sunday. With the win, Edgewater now lead the eight-team standings with nine points from three games. They are followed by Portmore United (seven points) and Cumberland and East Portmore Portals (six points apiece).

Games on tomorrow: Westport vs Edgewater at noon; Portmore United vs Daytona at 1:40 p.m.; Cumberland vs Watson Grove at 3:20 p.m.; and Portals vs Rodwood at 5 p.m. All matches will be played at the Passagefort playing field.

The trio of Jamalco, Reno, and Barbican are all on eight points, but Jamalco have momentum as they were the only team to win last weekend - a 1-0 last-minute effort against Axum.

A draw for Jamalco against Reno could also prove enough if out-of-contention Axum can produce a win at home against Barbican. The same scenario holds for Reno as well as Barbican, leaving all three in a position where the only guarantee is sealing their own destiny with a win.

Manchester Academy, made up primarily of Manchester High students, emerged winners of the Can Care Pharmacy Manchester Under-15 football competition after outlasting 360 Degrees 4-3 on penalties.

In the final last weekend at Kirkvine Sports Club, the two teams battled to a 2-2 draw in regulation and extra-time. Christopher James and Delzerone Simpson got Manchester Academy goals, while 360 Degrees got theirs from the leading goal scorer, Nicholai Gayle.

The latest win capped a fine season for Manchester Academy, as they had earlier won the Moorlands Development Pat Anderson Under-17 competition.

The annual Top Notch Blocks and Trucking-sponsored football competition got under way last weekend at the Sunset football field in Knockpatrick, Manchester.

In the season opener, defending champions Rose Hill defeated Plouden 3-1, while Urville Strikers edged Brokenhurst 1-0. The final game of the afternoon saw Cedar Grove defeating last year's beaten finalists, Generations of Northern Caribbean University, 2-1. That game ended with controversy after Cedar Grove won a late penalty. In addition to disputing the penalty call, Generations had more to complain about as the spot-kicker, Akeem Trowers, was given a second attempt after his first shot was saved by the Generations goalkeeper. The referee ruled that the goalkeeper had moved unfairly.

The competition continues tomorrow at 12:30 p.m. with three games: Knockpatrick vs Albion; Central United vs Heathfield; and Sunset Strikers vs Pear Tree.