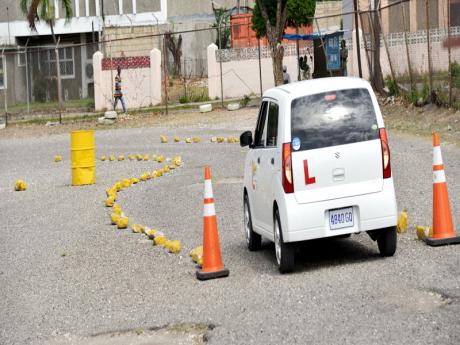 A learner driver navigates a vehicle between cones and stones which simulate a road they have to drive on. - File 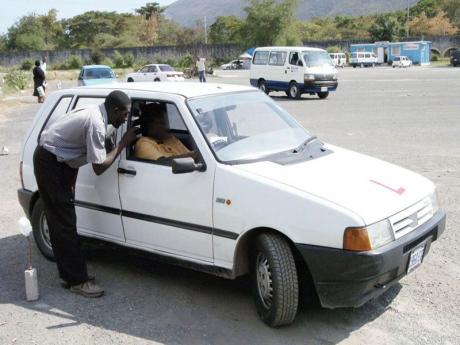 An instructor has a word with a learner driver. - File 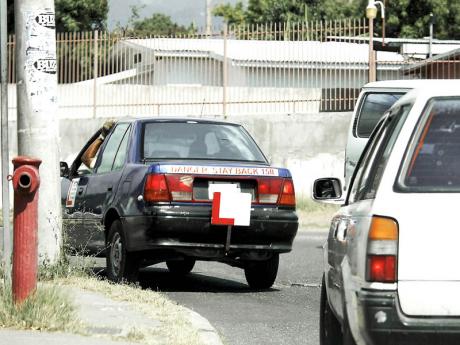 A clearly identified learner driver on the public road. - File
1
2
3

Two prominent driving instructors have raised concerns about proposed regulations for tutoring learners which are contained in the new Road Traffic Bill.

Section 27 (1) lists a number of prerequisites for granting a driver's licence and proposes that the Island Traffic Authority (ITA) shall not grant a permit to the applicant unless he or she has obtained from the authority a certificate of competence which declares that the applicant has satisfied these requirements.

Alphanso Grennell of Grennell's
Driving School in St Andrew said Clause A may have a loophole. The
clause requires that the applicant for a driver's licence must certify
to the authority that he or she has, immediately prior to the
application, been the holder of a learner's permit for at least six
months.

Grennell argued that it is possible for a
learner to have a permit for that period of time, but still be
incompetent. "There should be some logging done by the student or parent
or instructor to show that the person has been practising for six
months, because the person could have the licence for six months and
have never been behind a steering wheel," Grennell
said.

"So just arbitrarily saying six months won't
address the matter of proper training before the person goes for their
driver's licence, because you can have it for a year and not use it," he
said.

Krylion Clarke, director of Clarkie's Driving
School in Montego Bay, St James, argued that the prescribed six months
may be to the detriment of persons who are able to learn in a shorter
time. "There are people who will come and within three months they will
learn and can go and pass their driving tests," Clarke
said.

"That (the legislation) will be a disadvantage
to those people, while some people take longer to drive. You have some
who are quicker at learning; they are more courageous and astute and
aware and they read their road code book. These people will be at a
disadvantage," Clarke said.

He reiterated that "I
really don't agree with the time period. They should judge you by your
competence and not the time you have your learner's licence, because you
have people with three or four learner licences and they still can't do
well."

Section 25(1) clause E (ii) of the recently
tabled bill, which outlines the conditions of a learner's licence, has
also attracted criticism from Grennell. It states that the holder of a
learner's permit should not drive on any road where the maximum speed
limit exceeds 80 kilometres per hour.

"It's folly,
because when they get their licence they are going to drive on Highway
2000. Does that mean when they get their licence they can go and drive
at 110 kilometres per hour? My thing is how will it be administered,"
Grennell said. On the other hand, Clarke supports the restriction,
saying "they are learner drivers, they should not be taken into areas of
speeding".

Under the proposed legislation, persons
who have just been granted a driver's licence will not be able to drive
on roads where the speed limit exceeds 80 kilometres per hour for a
year.

Clarke lauded Section 27(1) B, which stipulates
that learner drivers must receive lessons from certified driving
instructors. It states that applicants must have obtained a certificate
of competence in the prescribed form from a licensed driving institution
before a driver's licence can be granted to
them.

Clarke said "Too many people are going around
with people who are saying they are teaching to drive. So people are
coming out not getting the proper training and causing problems on the
road. With this is mind now, persons going with a certified instructor
will raise the bar to another level."

However, Clarke
said he is now eager for the Government to establish the procedure for
certifying driving instructors. "I want to know how they plan to get
these people certified, because currently there are no certified driving
instructors in Jamaica. There are people who are qualified and
competent, but they are not certified," he said.

"The
Government has been talking for years about certifying instructors, but
this is the closest we have come. We need the framework," Clarke
insisted.