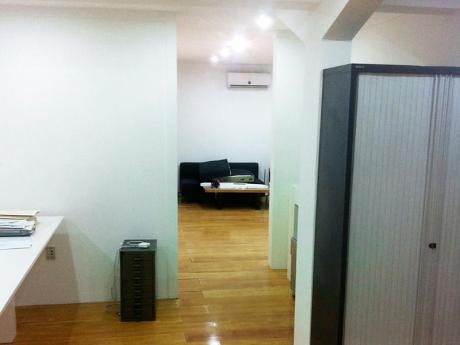 A model unit built with Moonraker's MGO board technology. 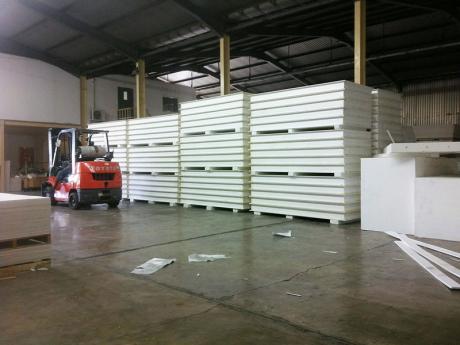 Stacks of MGO boards are seen inside Moonraker SIPS plant in Kingston.
1
2

Dry wall or ply board are typically used by building contractors as partitions or other construction, but a local company is offering an alternative - a more environment-friendly product in the form of a modified version of magnesium oxide or MGO boards.

Moonraker SIPS Limited, which operates from the Kingston Free Zone, has created what it describes as rot-resistant structural insulated panels (SIPS), using technology that was engineered through a third-party Chinese manufacturer.

Though Moonraker SIPS manufactures other sheathing panels locally, the MGO boards are produced by its partner in China then imported to reduce cost, says the company's chief executive officer Samuel Catling.

"When we launched the company, we were looking for a quick, affordable energy-efficient building system to introduce into Jamaica. So we went out there and basically took the concept of the structurally insulated panel and tried to identify an alternative," Catling said.

The 'Extremegreen' product, as it has been dubbed by the company, is also said to be termite resistant and non-combustible (or fireproof), and is mould and mildew resistant.

Catling said his product is "significantly cheaper" than any of the other cement boards in the market.

Moonraker SIPS, which began operating in Jamaica in 2010, has invested "a sum well in excess of US$1 million," in the technology, which Catling said has doubled the company's sales year on year.

"We introduced magnesium oxide board to Jamaica and the wider Caribbean. The product has been widely accepted throughout the market place and you will now find it in developments across the country such as hospitals, schools and housing developments," Catling said.

He named Richmond Estates and Rainforest Seafoods as clients.

"One of the main factors that our customers like is the 20-year warranty that we offer," said Catling.

There are "no toxins, glues or chemicals, and it is one of the healthiest building materials you will find today," said Catling.

Waste produced from cutting of the board on installation can be ground up and used as nutrients for the soil in flowerbeds, he said.

Moonraker SIPS is hoping to corner the local market, but first, Catling has

to convince building contractors to switch. The industry has a strong affinity for block and steel construction materials, and that tradition is hard to break.

"What happens is, basically, there has been a
huge amount of interest from the local market; people love the idea of
the panels, so we started pushing it into the hardware market as a
replacement for ply and dry wall," said Catling.

But:
"Jamaica is slow to adapt," he concedes, while insisting that his
product is gaining traction.

"We are still a young
company," Catling said, noting the company's position and market share
could not be accurately quantified at this point.

The
MGO board is a structurally reinforced sheathing made of magnesium oxide
(MgO) and magnesium oxychloride (MgCl) and reinforced with glass fibre
mesh.

"We have taken the technology and improved the
mixes. Essentially, we have modified it to our and the tropics' needs to
make it as impact resistant as possible in terms of hurricanes and
storm events. What was key to us was having flexion in the board so it
doesn't break on installation," the CEO said.

The
boards are cut in standard sizes such as 4x8 feet 4x10 feet and 4x12
feet, with thickness ranging from a quarter inch to half
inch.

MGO boards are intended for use as internal wall
lining, but may also be used as backing for tiles in wet areas. As
exterior sheathing, it may be used as framed walls, ceilings and
trims.

Moonraker SIPS is primarily involved in the
manufacturing of structural sheathing material, but also installs the
units and hosts training seminars for contractors and building
technicians locally.

At its inception, the company
bought its MGO boards from third-party suppliers overseas, but later
decided to develop a "board of our own", the CEO
said.

"So we spent quite a bit of time sitting down
with engineers to come up with a better board hence the launch of
'Extremegreen MGO' which is our own brand of magnesium oxide board,"
said Catling.

"It is flexible and withstands
earthquakes well. It is completely waterproof unlike dry wall. It is
perfectly suited to the tropics because even when it gets wet, it
doesn't not feed rot or mildew unlike dry wall."

Since
Extremegreen can be used both internally and externally, "it is
something that you can literally build a wooden frame house and clad it
with and it would be as strong as a block wall," Catling
said.

Moonraker was incorporated in Jamaica in
December 2010. The sole shareholder, Magwall Caribbean Limited, is
registered offshore in St Lucia. Moonraker's directors are Samuel and
Richard Catling.

Extremegreen is not monitored by
Bureau of Standards Jamaica (BSJ), but the agency knows of the product's
existence on the market, says regulatory manager, Paulette
Archer.

The agency later advised that it knows of no
problems with the use of the product, nor does it see a need to regulate
it.

Extremegreen "is not considered to be one which
negatively affects health, safety or the environment (and) is therefore
not a regulated product," the bureau advised by
email.

"Based on the thickness, it is expected to
behave in a manner quite similar to other cement boards. Magnesium oxide
boards are generally fire resistant and are suitable for use in place
of dry wall sheets as well as in place of other types of cement-based
boards. It's fire resistance rating compares it favourably with
gypsum-based products such as drywall," the BSJ
said.