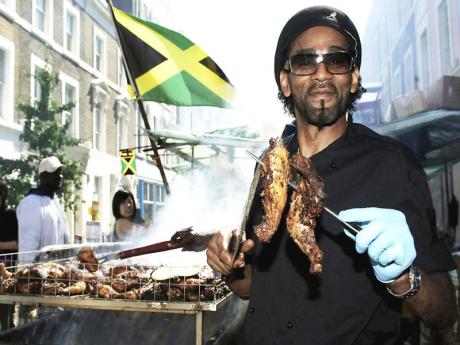 A barbecue food vendor prepares traditional Caribbean chicken for visitors at the Notting Hill Carnival in London in August 2005. The biennial relationship building meeting between UK and Caribbean governments will be held from June 16-17 at Lancaster House in London. - File

Every two years, the British and the Caribbean governments meet with the objective of moving forward a relationship that has become much changed.

This time, it is the United Kingdom's (UK) turn to host the event at Lancaster House in London on June 16 and 17. This is the grand UK government facility where in the 1960s and 1970s the Caribbean negotiated the constitutions that brought independence to almost every Anglophone Caribbean nation.

Attending what will be the eighth UK-Caribbean Forum will be almost all Caribbean foreign ministers, Britain's foreign secretary, plus other ministers and assorted officials.

In contrast to previous meetings - the last one was in Grenada - this will have a significantly lower profile, with no sessions open to a wider audience, no set piece opening or closing session, and no participation by the UK's European or North American partners.

Despite this, the event remains of significance as its overall outcome and any follow-up will demonstrate the nature and future trajectory of the UK-Caribbean relationship.

Importantly, at least as far as the UK is concerned, the event takes place with Cariforum, so it includes the Dominican Republic which has become a partner of increasing economic and regional security significance to Britain.

Although the event will involve difficult exchanges on aspects of the political relationship, there will also be discussions on alternative approaches to helping to resolve the region's energy problems, and a new and welcome focus on education and exploring ways in which the UK might be able to play a role in supporting the region in preparing its young people and future leaders for a world in which new skills and thinking are required.

There is also a business forum that will encourage UK investors and enterprises to take a greater interest in the region, and a meeting with British parliamentarians with an interest in the Caribbean region.

In addition, there is a collateral event, also at Lancaster House, which will bring together invited members of the Caribbean diaspora to debate with British politicians and foreign ministers issues of concern, with the objective of greater community involvement in developing UK thinking about the Caribbean.

From a British perspective, the overarching interest is for the forum to identify ways in which the relationship might be adapted to respond to its changing objectives and economic limitations at a time when the Caribbean region has new partners that are prepared to support infrastructural development, investment, and provide new forms of developmental assistance.

Its hope is that the forum will result in greater coordination and identify how it might better support the region's needs in relation to energy, education, private sector-led growth and regional security, while helping identify the skills needed to enable the region to increase its capacity and competitiveness; all within a partnership that emphasises core interests and shared values.

For the Caribbean, the issues are more specific, challenging and difficult. They revolve around reparations, the recent graduation of much of the Caribbean out of development assistance, the problems associated with vulnerability and smallness, and are about visas and migration.

As with so many events involving the Caribbean's traditional interlocutors and trade partners, the meeting would therefore seem to start with a mismatch between aspiration and reality.

Although the world's sixth-largest economy, Britain's role on the world stage is diminishing, and as a consequence, its priorities have changed. It still sees the Caribbean relationship as special, but in future, as increasingly being soft-power based; there are important exceptions, largely relating to security, investment and some geo-strategic concerns. In contrast, much of the Caribbean still seems to see the relationship as delivering in one or another way material forms of support.

The consequence is that unless this divide can be bridged and there is a willingness to overcome bureaucratic inertia on the Caribbean side, the relationship is likely to suffer continuing disappointments for both, reinforce the view that the other is not delivering, and result in those bilateral relationships that work taking precedence.

The litmus test will be whether this event has a practical outcome that looks forward with enthusiasm, and if what is agreed on paper is ever followed up on or delivered.

One aspect that neither side seems to have fully understood is that the future of a more soft power-oriented relationship will be that, to a significant extent, this will have to be driven by people-to-people contact, whether though business and investment on a two-way basis; those in Britain's increasingly middle class and professional Caribbean community whose role in moving policy has largely been ignored; via philanthropy; and through financially stable academic, NGO and business institutions able to deliver programmes that cement non-government ties and hold the collective memory about the relationship. All of this has a cost that seems less and less likely to be met.

One consequence of diminishing resources for civil society is a significant imbalance between the UK's substantial representation in the region and Britain's ability to successfully deliver outreach in the UK. Put another way, the UK's image in the region exceeds its capabilities and may disappoint despite its many excellent and engaged younger high commissioners and ambassadors.

Today, Britain's focus is on thematic approach to foreign policy, on major markets, on global security and on securing the transatlantic relationship. Its politicians are driven by the twenty four hour rolling news agenda and complex domestic political issues in ways that at times seem to give precedence to perception and marginalise many of the difficult issues that touch small states.

For its part, the Caribbean has failed to weave its requirements into a whole that places the region in a new contextual framework as a distinct grouping of states with a clear and common agenda that can be linked with the global interests of traditional partners and their acceptance of multi-polarity.

Let us hope that the UK Caribbean Forum helps to develop new thinking and starts to define where the region or individual nations might be twenty years from now and enables the UK to reset and redefine its role within this context.

David Jessop is the director of the Caribbean Council.david.jessop@caribbean-council.org