Tesla handing over keys to its patented technology 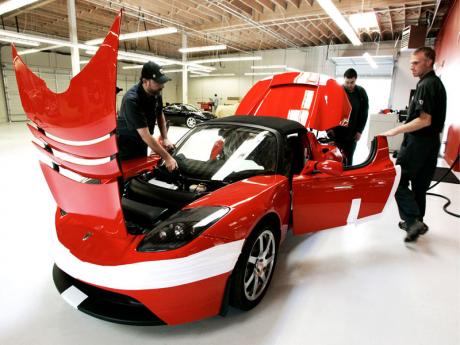 Tesla workers assemble a Tesla Roadster at a showroom in Menlo Park, California, on September 16, 2008. - File

Electric car maker Tesla Motors is handing over the keys to its technology in an unusual effort to encourage other automakers to expand beyond gasolene-burning vehicles.

Tesla CEO Elon Musk promised on Thursday to give away the company's entire patent portfolio to all comers, as long as they promised not to engage courtroom battles over intellectual property

"If we clear a path to the creation of compelling electric vehicles, but then lay intellectual property landmines behind us to inhibit others, we are acting in a manner contrary to that goal," Musk wrote in a blog on the company's website.

The decision opens the door to more collaboration with Tesla, which is already making electric systems for Daimler and Toyota. Other automakers using Tesla's technology could potentially share the cost of Tesla's charging stations, for example. And more charging stations could entice sceptical buyers to try electric cars.

Seven years after Tesla introduced the Roadster electric sports car - which it no longer makes - electric cars still make up less than one percent of United States (US) sales.

Drivers remain concerned about their range and the lack of places to get a charge. Stable gasolene prices have also hurt sales.

Musk wants Tesla to help change that. The Palo Alto, California-based company currently makes one vehicle - the US$70,000 Model S sedan - and is developing two others. Its Model X crossover is due out next year, and Tesla wants to start making a cheaper model by 2017. It's currently scouting locations for a US$5 billion battery factory to increase supplies.

But Musk said Tesla can't make a dent in the market by itself, and thinks the patents could be a "modest" help to other companies developing electric cars. He says Tesla has gotten few requests for technology from rivals, but he thinks that's partly because patents were blocking access.

"If we can do things that don't hurt us and help the US industry, then we should do that," he said.

At the start of this year, Tesla had been issued 203 patents covering its batteries and other key features that distinguish its electric cars from gasolene-powered vehicles.

Another 280 patent applications are still pending in the US and other countries, according to Tesla's regulatory filings.

The earliest any of Tesla's current patents expires is in 2026, so the company is relinquishing a potentially valuable long-term advantage by giving away its intellectual property to its rivals.

Musk named his company for Nikola Tesla, a famous inventor who became so exasperated with the legal system that he finally stopped patenting his ideas.

Analysts said the announcement has little downside for Tesla, and could solidify its leadership in the market.

"By opening its patents, Tesla rightly realises it's better to be the best product in a large industry than the only product in a niche one," observed Silicon Valley entrepreneur Aaron Levie, the CEO of file-storing company Box Inc, in a Thursday post on his Twitter account.